Carrie Underwood is helping her home state the best way she knows how: A huge donation to tornado relief efforts. 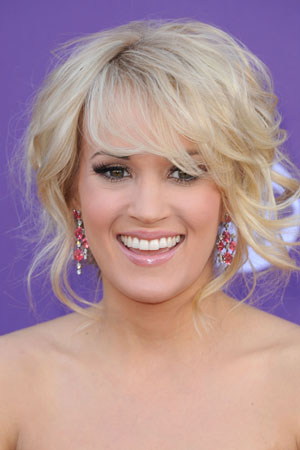 Ricky Gervais is probably pretty proud of Carrie Underwood right now: The singer — fresh off her Blown Away tour — pledged a $1 million donation to tornado-ravaged Oklahoma.

“I have watched the devastation in my home state of Oklahoma over the past several days with great sadness,” the Muskogee native said in a statement.

“With the help of my fans who attended my concerts over the past year, we can offer the Red Cross a little extra help in comforting those affected by the recent tornados.”

Other celebrities have pledged money, too: Oklahoma City Thunder star Kevin Durant pledged $1 million — an amount matched by his team.

“As the day went on and I saw the footage and the casualties and the houses being blown away, it was tough to see,” Durant said in a statement. “I call Oklahoma City my home. I go through Moore all the time. It’s unfortunate. We’re going to come together as a city like we always do and we’re going to bounce back.”

Blake Shelton and wife Miranda Lambert — who live in the area — are also planning a May 29 benefit for those affected by the devastating E5 tornado.

Gervais also donated money to the Red Cross, but he was more interested in blasting celebrities who tweeted “thoughts and prayers” messages instead of real support.

“Beyonce, Rihanna & Katy Perry send prayers to #Oklahoma #PrayForOklahoma,” he tweeted. “I feel like an idiot now… I only sent money.”

“Praying for something but not doing anything to make it happen has the same effect as writing to Santa & not letting mummy read the letter,” he added in a later tweet.

“You can support #Moore response by txting REDCROSS to 90999 to give $10, or online at redcross.org #ActuallyDoSomethingForOklahoma.”