It’s an unlikely feud, but a feud nonetheless: Frances Bean Cobain has declared war against Kendall Jenner on Twitter. Now the reality star is striking back. 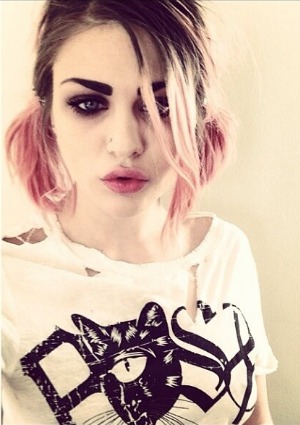 In the war between rock royalty and reality stardom, which side will prevail? Frances Bean Cobain — daughter of Courtney Love and grunge legend Kurt Cobain — has taken on what she thinks is the utter self-absorption of Keeping Up with the Kardashians star Kendall Jenner. Now the teen model is striking back.

It took her a couple of days, but Jenner finally came up with a comeback to the slams Cobain threw her way — a surprisingly mature and measured response one for a girl her age.

“An individuals feelings are relative to their environment,” she tweeted. “You don’t know me, you don’t even know what I was referring to.”

“I am aware that i am very privileged and blessed, and im thankful for that everyday, i know there are greater problems in the world,” she continued, adding, “I pray for those people every night and give back as much as i can. So who are u to judge me?”

Get the scoop on all the juiciest celebrity feuds — subscribe to the SheKnows Entertainment newsletter! >>

Most of the tweets by both have since been deleted, but here’s how it began…

It all started with a simple, innocent tweet Jenner sent out Tuesday.

“Just wish things could be easier sometimes,” she wrote.

Somehow the single line reached Cobain and she just about lost her shizz over the entitlement she saw in that simple statement.

“i’d rather be a scumbag than a f***ing idiot,” she responded. “Praise high IQ’s, good taste & awareness about the state of the world. oh ya, not to mention, CANCER, famine, poverty, draught, disease, natural disasters, Death. F***, Humans are so self involved.”

Tell us: Are you Team Frances or Team Kendall?