There are a lot of non-Beliebers out there, but is all this Justin Bieber backlash really necessary? I say no, and here are five reasons why we should give the pop star a break. 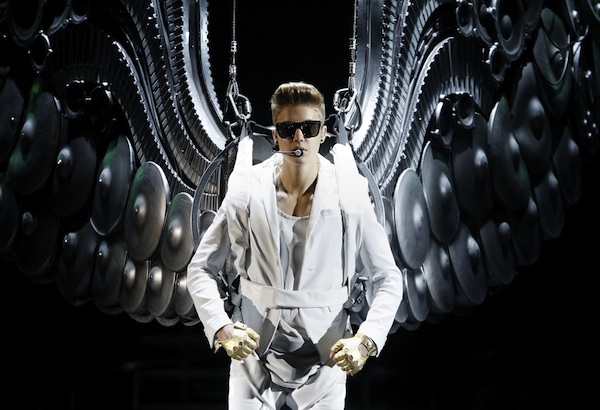 He’s supposed to be a teen idol, but he’s hardly the guy you want your teens looking up to. He is constantly grabbing his crotch on stage, keeps getting tattoos and is rumored to be a pot smoker. Well, at least there isn’t a sex tape — yet.

In fact, a new poll from Public Policy Polling showed that Americans of all political affiliations are united in their dislike for Justin Bieber, with 54 percent of respondents rating The Biebs unfavorably. Chris Brown fared only slightly worse.

Is this what it has come to? Do we really have to bring down our idols?

Well, I’m here to say that we need to give the guy a break. Here are five reasons we shouldn’t be so tough on The Biebs.

How many of us would have looked like idiots as teenagers if we were being followed 24/7 and every move we made was scrutinized?

Remember, he was discovered at 14.

5 Secrets about teenagers that every parent should know >>

Being a teenager is embarrassing! And we all have been there.

So when Justin Bieber wrote in the guestbook of the Anne Frank house that he hoped Anne Frank would have been a Belieber, it was embarrassing, yes, but also just a stupid kid move.

I am sure a lot of other stupid things have been written in that guestbook by teenagers, but we are only focusing on this one.

We can’t hold Justin Bieber to a higher standard just because someone found a song he did on the internet and he became a worldwide pop icon. He’s still a teenager, and he does dumb stuff.

By the way, Anne Frank was a teenage girl. Teenage girls love Justin Bieber. And, according to Anne Frank’s stepsister, she probably would have been a Belieber and the backlash was “childish.”

I understand that Bieber is a pretty easy target. He puts himself out there by walking around London without a shirt on (see the above point).

But did Olivia Wilde — an actress 10 years older than Bieber — really need to tweet, “Bieber, put your f***ing shirt on?” No. She did not. It’s bullying and it’s rude.

And talk about rude, the guy even got booed while accepting the fan-voted Milestone Award at the 2013 Billboard Music Awards.

Justin Bieber is not just a pop star. He is also a human being, and we don’t need to be mean, people.

What a mom would say to Justin Bieber >>

In reply, Bieber told the jeering crowd at the BBMAs, “I’m 19 years old. I think I’m doing a pretty good job. Basically from my heart I really just want to say it really should be about the music. It should be about the craft that I’m making. This is not a gimmick and I’m an artist and I should be taken seriously.”

OK, so he takes himself and his “craft” maybe a little too seriously, but that’s all he’s got. He’s trying to be serious about his work. That’s a reason to applaud him — not to boo the guy.

Concert tardiness is not exclusive to The Biebs

Justin got a lot of backlash when a recent concert in London reportedly started two hours late, making the throngs of screaming teenage girls very sad — and I’m certain out way past their curfew.

The next day, Biebs apologized on Twitter, citing “technical issues.” He also argued against the report that he was two hours late. Biebs explained that even though the start time was listed as 8:30, he was scheduled to go on at 9:35 and he was onstage at 10:10, making him only 40 minutes late.

In an interview with the U.K. paper London Evening Standard, after Biebs showed up to his concert late, Jon Bon Jovi said, “It’s really not cool — you’re an a**hole.”

Yes. It’s not cool. But did a 51-year-old rocker really need to call a 19-year-old pop star a name? That’s uncalled for.

You know who are consistently late to their concerts? Madonna and Rihanna. Justin was late once, yet people are calling him names.

And, at least Justin did the right thing and apologized. Madonna? Rihanna? No apologies for their consistent tardiness.

If paparazzi cameras were around me all the time, capturing every second of my life, I would lose it too.

And lose it he did. Last week, Bieber charged at a paparazzo who called the 19-year-old pop star a “f***ing little punk” and a “f***ing moron” and proceeded to tell him to “go back to America.”

Now think about it. Bieber can’t go anywhere — not to Starbucks to get a latte, not to the hat store to buy a new hat, not to McDonald’s for a McRib — without getting chased by people wanting to take his picture and yelling at him. Sometimes the things they yell are nice, and sometimes he’s called terrible names.

That would wear on anyone. I am surprised he hasn’t come after a paparazzo sooner. I would have.

Blab about a Bieber party, get sued >>

This may be no surprise, but Justin Bieber has people who do stuff for him. He has assistants and managers and agents and a “swagger coach.” What exactly a “swagger coach” does, I have no idea, but I know that I do not have one.

We have to remember that, once again, he was found online when he was 14 and made into a star. There’s a lot of baggage that comes with that, but there are a lot of people who come along with that too.

If he is late for a show, or wearing something stupid or abandons his pet monkey in Germany, he pretty much makes these decisions in a vacuum.

It’s very hard to have a hold on reality when you live such an insulated life.

So what do you think? Should we give Justin Bieber a break, or are we totally off base here? Let us know in the comments.