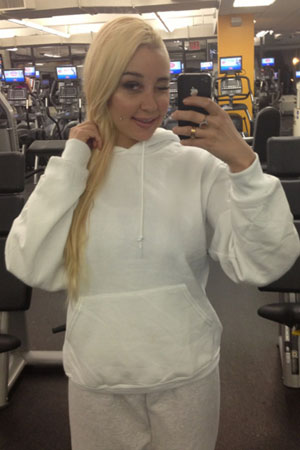 Amanda Bynes is in more trouble, this time with the New York Police Department. According to NBC New York, the “retired” actress was arrested for reckless endangerment, tampering with physical evidence and physical possession of marijuana after cops were called to her Midtown Manhattan apartment.

The doorman of the West 47th Street building called police to report that Bynes was allegedly smoking marijuana in the hallway. She then allegedly threw a bong out a window when police arrived.

Police then transferred her to Roosevelt Hospital for psychological evaluation, according to media reports.

The arrest comes just days after In Touch Weekly published a series of disturbing photos showing a dirty Bynes smoking an unknown substance with “friends” inside her apartment.

She later tweeted that the magazine “fake altered photos” to go with their new cover story “because they f*****g hate me.”

“That’s not my bed! Those aren’t my toes! My toes are pedicured!” she tweeted. “They used an old shot of me on the cover with a bad angle of my old nose before I had surgery to reshape my profile and to remove the webbing from my eyes.”

“I have to sue because that’s not my apartment, those aren’t my clothes!” she continued, adding that the magazine “morphed photos of my face onto someone’s body to ruin my life!”

“I have to make a big deal of this and sue because that’s not me! I care about my appearance so I have to defend myself! I look like a different person now that I had surgery,” she said.

In Touch denied altering the photos.

“The photos of Amanda Bynes inside this week’s issue of In Touch speak for themselves. We at In Touch have done our due diligence and research on the photos and the article that accompanies them.”

Tell us: Will this arrest be Amanda Bynes’ wake-up call?