A Brad Pitt confidant claims that he still has a friendship with his ex-wife, Jennifer Aniston. More like frenemies, we say. 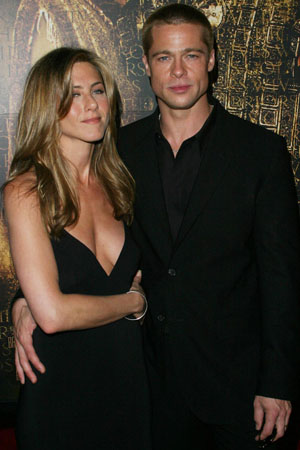 Apparently Brad Pitt didn’t mean it when he said that he was a “bit of a drifter” during his marriage to Jennifer Aniston. At least that’s what one of the actor’s longtime friends says.

“I think Brad was ready to soar when he met Angie,” Pitt’s friend, makeup artist Jean Black, told Us Weekly. “This is not to say anything negative about Jennifer. I was part of that and I know that he and Jennifer are very good friends and he cared deeply for her.”

Black was referring to the World War Z actor’s comments in a new interview with Esquire.

“For a long time I thought I did too much damage — drug damage. I was a bit of a drifter,” he told the magazine. “A guy who felt he grew up in something of a vacuum and wanted to see things, wanted to be inspired. I followed that other thing. I spent years f***ing off. But then I got burnt out and felt that I was wasting my opportunity. It was a conscious change. This was about a decade ago. It was an epiphany.”

Many figured he was referring to his relationship with Aniston. If so, it was a low blow. However, Black says Jolie popped into his life at just the right time.

Why Brad Pitt needs to get some friends, stat >>

“But in Angie,” Black said, “he saw a very adventurous person who was grabbing on to life and taking it to its nth degree. It was intriguing because I felt Brad had that in him and wanted to unleash it.”

But, is Black really close enough to Pitt to know for sure? We’re skeptical, especially since the actor also said he doesn’t have friends outside of his family.