There are only two episodes left until Season 1 ends, but still so many questions. The fight for power is coming to a head as the rebels and the militia converge at the Tower. 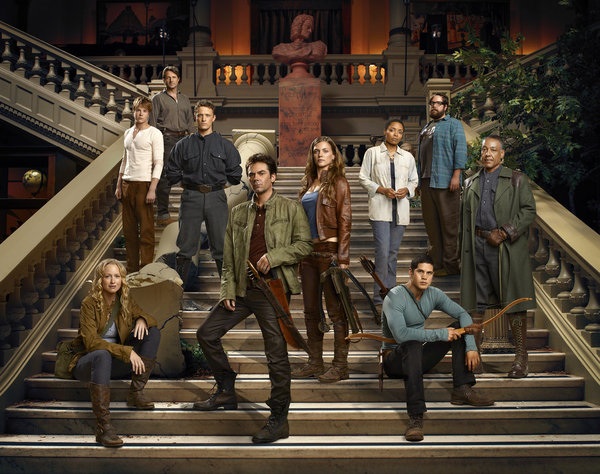 This season, Revolution has transformed from near-future adventure to action-packed war for power, leaving a trail of mysteries in its wake. Don’t expect all the answers. The show has been renewed for another season (kudos to NBC for renewing a show!). And, knowing executive producer J.J. Abrams, a second season still doesn’t guarantee answers. You haven’t forgotten Lost, have you? We don’t expect the journey to be easy, but here are the top 10 things we want to know:

What’s up with Monroe’s baby?

This is the question that’s driving us crazy. There’s this huge episode (one of the best of the season) where we find out Monroe (David Lyons) slept with Miles’ girlfriend Emma back in the day. As if that isn’t enough, Emma is killed right after she tells Monroe she had his son. And that’s, apparently, where the story ends. The show hasn’t mentioned the child at all nor has Monroe seemed even remotely interested in discovering where he lives. It seems only natural that he would have been with his mother in the same town. It wouldn’t have been hard for Monroe to track the boy down, right? Maybe we’ll get some information before the season finale. At this point, we don’t know if we should hope.

Who will win: the rebels or Monroe?

The classic question of the season. We bet no one will, yet, at least. What would the show be without the fight between Miles (Billy Burke) and Monroe, the militia and the rebels? Monroe can’t go down that easily, and we can’t have Revolution without Uncle Miles.

Will Charlie and Jason have a stable relationship?

First, Charlie (Tracy Spiridakos) doesn’t trust Jason. Then they’re making out. Then she doesn’t trust him again and thinks he’s murderer. It’s a complicated relationship. Will the two be able to find some sort of stability before the season finale?

Same as above for Miles and Nora

It must run in the family. First, Miles and Nora are sleeping together. Then he becomes the evil general so she doesn’t trust him. Now, he’s back on the good side and they’re sleeping together again, but she has her reservations. She’s over her trust issues, but she’s worried if they start a relationship they’ll have to watch each other die at some point. Still, after last week’s episode, the odds are looking good these two will make it to the end together.

Same as above for Jason and Tom

This is father/son angst like we’ve never seen it before. Not only have they tried to kill each other multiple times, they’ve also managed to save each other’s lives a fair amount as well. All is not bright in this family dynamic. Will Jason and Tom Neville ever be able to have a loving relationship, or are they too far gone?

We see them reconciling. Maybe it’s the need to see the good in everyone, but the two have shared some tender moments amid the hostility in the last few episodes. Especially that scene where Tom stayed behind after the building collapsed to save Jason’s life. We think Tom deserved that smooch from his son more than Charlie deserved that make-out session.

Will Rachel turn the power back on?

More than anthrax or nuclear weapons, the Tower holds the key to power (both political and electrical) within the Revolution world. Rachel wants to turn it on to level the playing field against Monroe, while Monroe is fighting to stop her. It can’t be as simple as flicking a switch. There’s got to be some catch with this Tower, so it’s anyone’s guess what the outcome will be when Rachel gets her hands on the technology.

How is Aaron the key to the power?

There’s a book with all this information about Aaron, linking him to the power outage, but no one knows why. Before the power went out, Aaron was a super-genius working at Google. No doubt, he created some technology or other that was key and didn’t even realize it. In the tale of Revolution, Aaron is like Sam was to Lord of the Rings. We only hope he has as heroic of an outcome as Sam did. Why? Because Aaron could use a little glory. Sometime we just want to see the good guy come out on top and shine.

Will Miles be able to stay good?

He’s struggling with his dark side. Being a general hasn’t been easy. We especially saw this on the episode “The Love Boat,” where Miles was willing to let a family die if it meant a victory for the rebels. Luckily, Charlie was there to put her uncle in his place. Our guess is this will continue to be the cornerstone of their relationship. Miles thinks about doing something stupid, and Charlie will make sure he takes the high road while still saving the day.

Will Charlie see her mother again?

They left each other with such finality, but expect these two to be reuniting shortly. After all, when we last saw Rachel she was at the Tower while Charlie was traveling to the same place. They need a little mother/daughter time with so much unfinished business to attend to.

And Rachel too, for that matter. When we last saw them, Rachel was pulling the plug on a grenade in Monroe’s tent. From previews of the next episode, we see a giant explosion. We think the nanites will save Rachel, but will Monroe be as fortunate? Yes, he will. NBC released pictures from the season finale that prove he survives. That doesn’t mean he won’t meet his demise another way.