Brad Pitt surprised audience members at an advance screening of his upcoming film World War Z. Pitt is trying to drum up good word of mouth for the zombie flick. 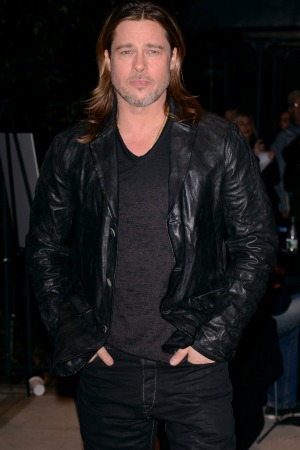 Hoboken, New Jersey, was the place to be last night, especially if you’re a Brad Pitt fan. On Wednesday, the actor dropped by an advance screening of his summer film World War Z.

The visit was unannounced, so the fans were shocked at the unexpected visit.

Pitt is heavily promoting the upcoming zombie film which has been plagued with issues throughout production from script rewrites to production halts due to illegal firearms. The original release date was December 2012, but with all of the setbacks, the film was pushed to this summer.

Pitt needs this hit after suffering from box-office disappointment with his last flick, Killing Them Softly. With that in mind, it’s no shock that he’s looking to pull any stunt to get the word of mouth going on his new film.

The actor dressed in his usual all-black ensemble to greet the audience. The crowd cheered as he entered the room and shared his enthusiasm for the popcorn movie.

Pitt said in a video shot by a theatergoer, “Thank you all for coming out. I know it’s late, and we really appreciate it… Today we came out to show the film for the people we made it for — our fans!”

Flashes could be seen from everyone’s smartphones as the audience rushed to take photos and videos of Angelina Jolie’s fiancé. He’s even seen throwing out T-shirts to the crowd.

In his speech to the audience, he continued, “We said, ‘Well, there’s no other place better than Jersey!’ We’ve got T-shirts for everyone, and we’ve got a massive film for you. It’s epic, it’s scary as hell and I guarantee you it’s the most intense thing you’re gonna see all summer.”