Lana del Rey’s new song “Queen of Disaster” has just been leaked online, and while her song of a damaged girl falling in love with a bad boy remains the same, the music is entirely different. 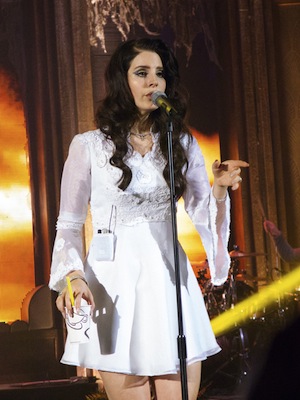 When you think of Lana del Rey, most people think of beautiful and moody torch songs.

Well, wait. Most people think of her disastrous 2012 Saturday Night Live musical performances where nerves — or something else — got the better of her.

But after that performance and Kristen Wiig’s hilarious impersonation of her the following week, when you think of Lana del Rey you think of her torch songs.

For instance, her debut song “Video Games” had the pouty-lipped singer crooning about a bad boy she loves a lot more then he loves her back. “Swinging in the backyard
pull up in your fast car
whistling my name.
Open up a beer
and you say, ‘Get over here’
and play a video game.”

Love lessons we learned from The Great Gatsby >>

Her persona, as Time reported in 2012, is one of “a haunted Hollywood studio girl, an ingénue in the thrall of a bad, bad man.”

Complete with her early 1960s fashion sense and overly mascara-ed eyes, del Rey evokes, in her own words, “Lolita lost in the hood.”

Del Rey’s new song, which was recently leaked online, is titled “Queen of Disaster” and del Rey continues to look at life through her dark, gauzy, old-Hollywood filter. Once again, the young girl has fallen in love and once again, it’s the bad boy who has caught her heart.

Find out what your attraction to bad boys really means >>

But this time the brooding has turned upbeat. Over a distinctly Motown-esque hook, she sings, “You’ve got me spinning like a ballerina. Feeling gangsta every time I see ya.” The chorus goes on, “You’re the bad boy that I always dreamed of. You’re the king and I’m the beauty queen of disaster.”

One can’t help make comparisons between del Rey and another pop songstress who invoked an earlier time — Amy Winehouse.

The troubled life and death of Amy Winehouse >>

However, unlike Winehouse, it seems as if del Rey has kicked any addictions she may have previously had. Well, she’s kicked them all except one — that bad boy she sings so often about.

Listen to Lana del Rey’s new track, “Queen of Disaster,” and let us know what you think in the comments below.