Ron Livingston and his wife Rosemarie DeWitt announce the name of their new baby.

We have some exciting baby news to share! People magazine reports that Ron Livingston and Rosemarie 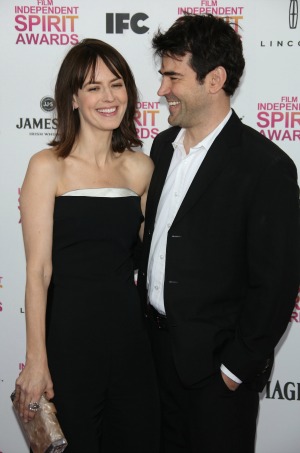 DeWitt have become first-time parents. The Office Space star, 45, and DeWitt, 38, met while shooting the Fox show Standoff and married in November 2009 in San Francisco.

Speaking through their reps, the actors said they are “thrilled to announce the arrival of their daughter, Gracie James Livingston.”

Livingston and DeWitt kept their bundle of joy a secret for nearly a month. Their little girl was born on Monday, April 29 and has already brought her parents great joy. “The whole family is happy and well,” the reps reported to the magazine.

Being new parents to little Gracie (we love the name, by the way) isn’t the only thing on the couple’s agenda this year. Livingston will next appear in this July’s supernatural film The Conjuring, as well as Boardwalk Empire this fall, while DeWitt, who was last seen in Promised Land, will next appear in Touchy Feely.

Baby Gracie is just one of many famous babies born recently. She joins little George Samuel and Everett Joseph, who were born two months early but healthy to country singer Chely Wright and her wife Lauren Blitzer Wright, and baby Magnus who was born to actress Jennifer Nettles earlier this year.

There are celebrity babies everywhere! Soon the royal family will be welcoming Kate Middleton’s little one, plus there are all the rumors surrounding Beyoncé and a possible brother or sister for Blue Ivy. Add to that the fact that Britney Spears apparently has babies on the brain and it starts to sound like nearly everyone in Hollywood has baby fever.