In her new film, We’re the Millers, Jennifer Aniston strips down to nearly nothing and shows us what’s she’s got. 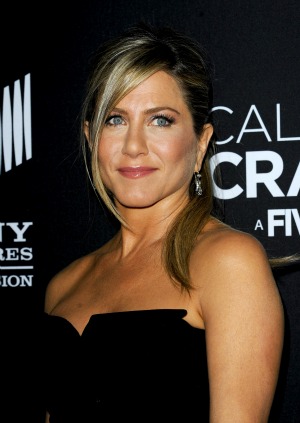 Jennifer Aniston has been one busy gal this week. Just yesterday, we found a hilarious video of her and former Friends costars Matthew Perry and Courteney Cox fooling around for The Ellen DeGeneres Show, and now she’s frolicking in her undies for her latest film.

The flick, We’re The Millers, stars Aniston as a stripper who gets talked into helping a hapless pot dealer (SNL‘s Jason Sudeikis) move his stash from Mexico to the U.S. The two team up with a couple of odd kids to play a family, hoping to avoid getting caught at the border with the shipment, but things of course get more complicated from there and lots of hilarity ensues.

Aniston is seen in multiple outfits and wigs in the trailer, including a burgundy bob that kind of reminds us of her Rachel ‘do from back in her Friends days. She also dons a black bikini-type number with a super-long platinum wig before becoming the fake mom for the fake family, then she’s all pony tails and flowery blouses. But just wait and see what happens to her cutesy outfit when she’s forced to prove she’s actually a stripper.

What does Aniston’s fiancé Justin Theroux think of her baring it (nearly) all for the big screen? We can’t be sure, but something tells us he probably doesn’t mind. After all, it’s not the first time that Aniston has taken off her clothes to show off her amazing body. She stripped down to nothing for The Breakup in 2006 as well as for the cover of GQ magazine in 2008. She’s obviously comfortable in her own skin and we applaud her guts.

Check out Jennifer’s striptease in the hilarious trailer. Warning: NSFW. This trailer contains strong language and adult content. (We mentioned there was stripping, right?)

What do you think of Aniston stripping in her new movie trailer? With a body like hers, why not show it off, right?