Eva Longoria is one busy woman. She is an accomplished actress, and now has her master’s degree in Chicano and Chicana studies from California State Northridge. 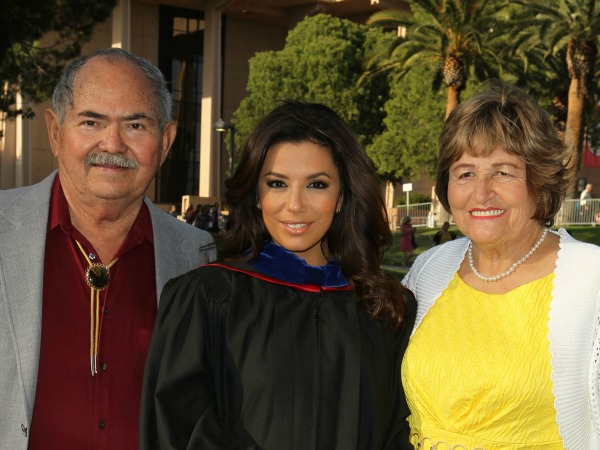 Eva Longoria has had a busy week! She started it off at the Cannes Film Festival, and ended it in California to receive her master’s degree.

The Desperate Housewives star received the degree in Chicano Studies from Cal State Northridge on Wednesday. According to TMZ, she has spent the past three years working on the degree, many times on the set of her show. TMZ also reported that her thesis was titled, “Success STEMS From Diversity: The Value of Latinas in STEM Careers” (STEM is short for science, technology, engineering and math). Longoria also has a Bachelor of Science degree in kinesiology from Texas A&M University.

“Longoria had lots of support from her family, friends and fellow stars, but don’t think for a second she thought she was too cool for school,” E! News said. “She posted a smiling WhoSay picture of herself with her ‘Chicano studies cohorts at CSUN,’ where she fit right in with her fellow new grads.”

Longoria also posted a slew of photos on Twitter before, during, and after the ceremony in her cap and gown, including one that said, “In my cap and gown with mom and dad! I look like Harry Potter!”

Eva Longoria’s sorority house life is anything but lonely >>

The proud parents were all smiles and obviously proud of their daughter. Longoria’s friends were also proud of the 38-year-old star.

“Huge congratulations on your graduation today!!!! From Canne to Cap and Gown,” Marcia Cross tweeted. “You are really something. Xoxo m.”

Jane Fonda attended a charity event at Cannes held by Longoria, and according to Us Weekly, she is inspired by the fellow actress.

“She does these things with such ease and grace,” Fonda said.

She added that Longoria left the film fest early to show up for her graduation.

Is Eva Longoria dating a Ready for Love contestant? >>

“Very excited to graduate for my Master’s degree in Chicano Studies!” she wrote onWhoSay just before the graduation. “You’re never too old or too busy to continue your education!”