Will hunts for a serial killer who attempts to make a unique work of art out of his many victims and winds up growing closer to the very murderer he’s hunting. 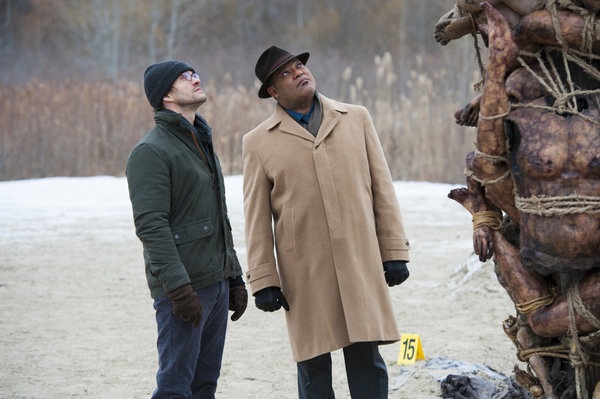 There’s no doubt about it. Murder on Hannibal is an art form. However, it was exceptionally displayed on this week’s episode when the killer Will hunts literally displays his body of work for all to see.

It was an incredibly gruesome scene as the murderer made a piece of “art” out of his victim in front of someone and then stabbed that victim and added it to his masterpiece to create a totem pole of dead bodies. It wasn’t just the two victims. Seventeen people were involved in his multi-layered dysfunctional (to say the least) creation.

This deranged killer knew his victims. They were family members or he went as far as boldly attending their funerals to leave his mark. And he left blatant clues that he just wanted to be discovered, because he was old and thought being caught would be better than a retirement home. Just another reason to dread old age.

As always, Will (Hugh Dancy) puts himself in the killer’s shoes that led to a blackout session and coming to in Hannibal’s office. Hannibal had the nerve (considering we know exactly what he’s made of) to tell Will he’s suffering from a form of self-indulgent abuse. It doesn’t help matters that Jack denies Will’s obvious emotional state, but Alana refuses to get involved with him because he is so clearly emotionally unstable.

Through his mystery insight and disillusioned blackouts, Will finally realizes that Abigail is the devious culprit. Not only that, but he realizes Hannibal’s (Mads Mikkelsen) involvement and gets the doctor to admit that he helped to bury the body of Abigail’s victim.

Instead of committing murder, which would be so easy for our serial killer, he trusts Will with his secret. He manipulates him by drawing him in and convincing Will it’s best to keep the secret, you know, for Abigail’s sake.

This creates a bond between the killer and the man that’s supposed to expose him. Now, he’s an accomplished and emotional ally in their criminal endeavors. It’s curious that a man who so deeply understands the mind of a killer could so easily be persuaded, but maybe that’s because he feels like a killer himself?

With only a few episodes left this season, you have to wonder if Will will figure out that Hannibal is who he’s searching for and possibly just cover it up because of the dysfunctional bond they’ve created. Only time will tell.