Oklahoma native Blake Shelton is stepping up to help his state. The Voice judge and NBC are planning an emergency telethon to aid the victims. 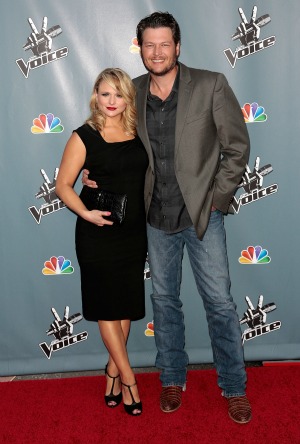 Blake Shelton is not one to sit back and let others take action. The Oklahoma native was moved to not only sing on Tuesday night’s results show of The Voice, but he’s also planning a benefit concert for the tornado victims with NBC.

Shelton and his wife, Miranda Lambert, sang “Over You” together on last night’s show while the Red Cross’ phone number was displayed onscreen. The 36-year-old is from Ada, Okla., which is about 75 miles south of Moore, where the tornado hit.

The song was originally written by Shelton and sung by his wife in honor of his older brother, who passed away when the country singer was a teen. The duo felt the song was a fitting way to open the live results show.

Shelton told CNN, “‘Over You’ was just the perfect song to fit, and maybe help some people heal and mourn and all those things.”

While details on the upcoming benefit are still sketchy, the talent competition judge told Billboard after the show, “We’ll know more about it in the next 24 hours. I’m hoping it will raise a lot of money. Obviously it will be televised and will happen really quickly.”

Hopefully, NBC and Shelton will bring together other Oklahoma celebrities like Trisha Yearwood, Reba McEntire, Toby Keith and Carrie Underwood to pay tribute to the victims. Shelton will also have his fellow judges from The Voice to lend a helping hand.

NBC is treading on familiar ground when it comes to putting on an emergency telethon. Last fall, the network hosted the benefit Hurricane Sandy: Coming Together with Matt Lauer and a large group of New York and New Jersey-based stars who call the East Coast home.

See Blake Shelton and Miranda Lambert perform “Over You.”