The Hangover series is the poster child for debauchery and excess. So imagine our surprise when we learned about the cast’s mellow wrap party. 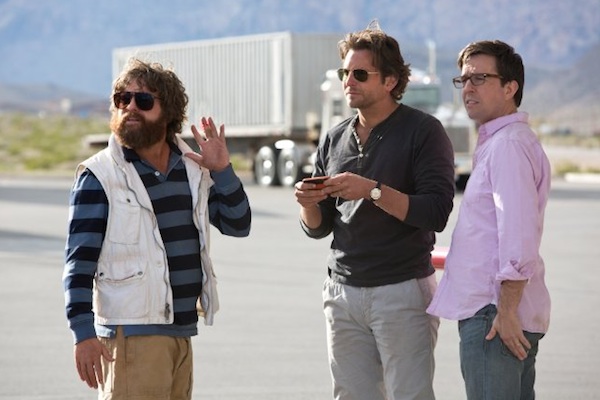 It’s hard to believe that The Hangover series is over. This Thursday, the Wolfpack trilogy will come to an end. The original film, which was released in 2009, helped usher Bradley Cooper, Ed Helms and Zach Galifianakis into the spotlight.

Party’s over: The Hangover Part III gets a release date >>

During the next few years, the actors became good friends in real life. They also bonded with the film crew, most of who worked on all three Hangover movies. When production on the final film wrapped, you’d expect them to end with a bang. But according to its stars, it was pretty low-key.

“It was strangely quiet. Sort of anticlimactic,” reveals Galifianakis at a recent press junket.

Cooper chimes in, “We were conscious of not making it a big deal. Very conscious. There was no like clapping or thing. We had a nice little party.”

The Hangover Part III baby is all grown up >>

During filming, the actors have had their share of memorable moments. But if Galifianakis had to choose one it would involve a naked senior citizen.

“The most I’d ever laughed was a day [when] we shot the first one [The Hangover]. I don’t know if you recall the older gentleman scene? When we were in the hospital with him and he’s nude. I got the giggles so badly… There was nothing but euphoria running through my body how hard I was laughing. I had to walk off the set I was laughing so hard.”

Will you be seeing The Hangover Part III this weekend?

The Hangover Part III opens in theaters May 23.