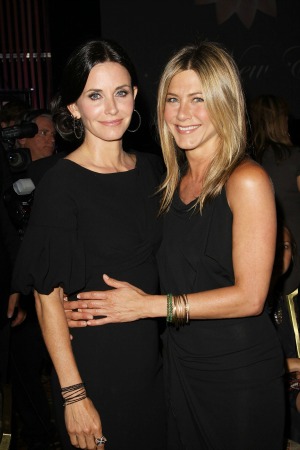 sets for a long-awaited reunion. Sadly, the story turned out to be not true and has now joined all the other rumors about the series (a reunion episode! a Thanksgiving special!) — something to be thought of wistfully and with many sighs.

But now we’ve got some Friends news that actually is true. No, there is no reunion episode, special or series happening, but it’s something almost as good. A few of the stars have gotten together for a mini-reunion of sorts, thanks to a video made by the great folks over at The Ellen DeGeneres Show. Jennifer Aniston is getting ready for another appearance on the show and goes to visit an old “friend” for some advice.

BREAKING: NBC on Friends return, “It’s a rumor and not true” >>

In the video, Aniston (who played Rachel) runs over to Matthew Perry‘s (who played Chandler) house to ask him some questions about being on Ellen’s show. When she gets there she finds a few surprises waiting for her. Turns out Courteney Cox (who played Monica) has been hanging out with Perry a lot more than anyone knew. Things get even more hilarious as Ellen’s wife Portia de Rossi tries to sneak her way out of Perry’s house, followed closely by Ellen herself.

It’s hard to do the video justice by talking about it, so why don’t you check it out for yourself:

While this doesn’t come close to having the entire cast back together for a Friends reunion episode, it’s still a ton of fun to see some of the cast together on-screen. We can only hope that, with all the obvious excitement and interest fans have in seeing the Friends folks together, the powers that be will decide to actually put on a reunion someday.