Ke$ha is all about being crazy and spontaneous, but she took it to a whole new level Tuesday night on her MTV reality show. 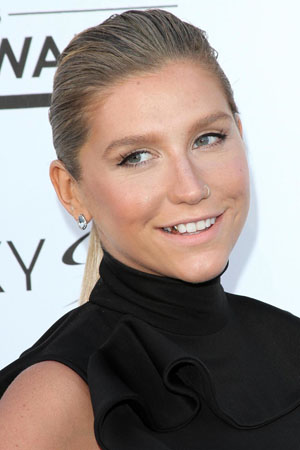 Ke$ha is known for doing some crazy things, but Tuesday night’s episode of her MTV reality series Ke$ha: My Crazy Beautiful Life takes the cake.

During the episode, the 26-year-old singer talks about her desire to look hot for an upcoming music video shoot.

“Now it’s time to switch gears, because I have a music video to make,” she said. “I want to get in kick-a** shape and look damn hot, and I’ll try just about anything.”

And she wasn’t kidding: She peed into a bottle — and drank it — after one of her companions told her about a hiker who drinks her own waste “like every day.”

Cameras panned away as K-E-dollar sign peed into a plastic bottle. It’s supposedly legit because MTV included the sound effects.

“It doesn’t even smell that bad,” Ke$ha said as she took a whiff of her own brand. “Here, smell it.”

So, did it help her magically lose weight and get hot? Nope.

Ke$ha has a memoir coming, and it’s illustrated >>

Plus, it tasted nasty (imagine that!).

“I wouldn’t recommend it. It was pretty gross. And I don’t think it really did anything very beneficial to me so, yeah, I wouldn’t probably do it again,” she added.

So, take it from Ke$ha: Don’t drink your pee unless you like to drink really gross things on a regular basis.

Read on for more Ke$ha

The Flaming Lips and Ke$ha team up for new album
Ke$ha: “I did NOT want to sing those lyrics”
Ke$ha had the best day of her life making her new album