Carol Burnett has another award to add to her mantel. The legendary comedienne’s being honored with the Kennedy Center’s Mark Twain Prize for American Humor.

Related story Carol Burnett Accepted a Golden Globes Award Named in Her Honor, & It Was So Touching 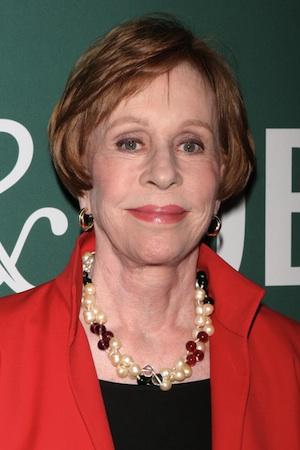 Carol Burnett is one of a kind. Not many women — or men — can rival her accomplishments. That’s why she’s been chosen as this year’s recipient of the Mark Twain Prize for American Humor.

According to Variety, Burnett will be the 16th person to receive the award. She’s following in the footsteps of Richard Pryor, Jonathan Winters, Lily Tomlin, Steve Martin and Whoopi Goldberg.

“The Twain prize honors individuals who possess a full body of work,” said event producer Cappy McGarr. “Carol has been on the list since the beginning, and you see her legacy every time you turn on the TV. Her influence can be seen on every slapstick and sketch comedy show, for example.”

Burnett is best known for her self-titled comedy series, The Carol Burnett Show, which ran for 11 years. Over the course of her career she’s won five Golden Globes, six Primetime Emmys and eight People’s Choice Awards.

With all that to her credit, Burnett’s still shocked that she was chosen. “I can’t believe I’m getting a humor prize from the Kennedy Center,” she said. “It’s almost impossible to be funnier than the people in Washington.”

Burnett’s been acting professionally for more than 55 years, giving memorable film and stage performances. Who can forget her as the cruel Ms. Hannigan in the musical Annie?

She’s back: First look at Carol Burnett’s All My Children return >>

Burnett is a self-professed soap opera fan, and for years appeared on ABC’s All My Children. She’s also done guest spots on Mad About You, Law and Order: SVU and most recently, Glee.

The Mark Twain Prize for American Humor will be given out Oct. 20 and air Oct. 30 on PBS.

12 hrs ago
by Lily Shell