Prince William can rest easy: His cousin-in-law, Mike Tindall, knows that Kate Middleton will be a great mom. 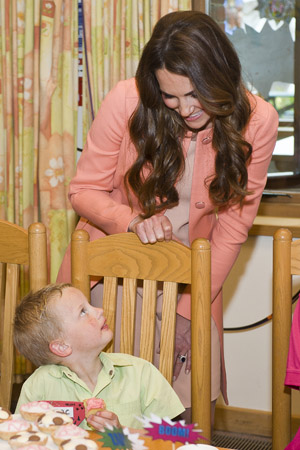 Kate Middleton might not be a mother quite yet, but her cousin-in-law isn’t worried about her learning curve.

“Willy, sorry Prince William, will be outstanding while Kate is a natural mother,” he said Monday.

“It’s great for them. The whole family is really excited about the baby. I think everyone’s excited,” he continued. “I’m so happy for those two. They’ll be great parents.”

That’s not to say there aren’t a few nerves worked up in there — especially with Prince William. The dad-to-be chatted about his impending fatherhood with a wounded soldier during a tour of the Tedworth House recovery center with brother Prince Harry on Monday.

“Are you looking forward to it, sir?” Corporal Josh Boggi, 26, asked Wills about his new job as dad.

“Very much so,” William replied. However, he turned down the chance to get in some daddy practice with Cpl. Boggi’s son, Jenson.

“No, no, you’re very kind,” the 30-year-old prince said when he declined the offer. Maybe he just wants to save his energy for the real thing?

“All the mothers have been looking at me, ‘Just you wait, just you wait. Long sleepless nights’,” he joked to a group of well-wishers.

Better get lots of sleep in before July, William!

Receive a text message when the royal baby is born! >>