Break out your tiara, pour yourself a cup of tea, and blast “God Save the Queen” — the royal baby is here! 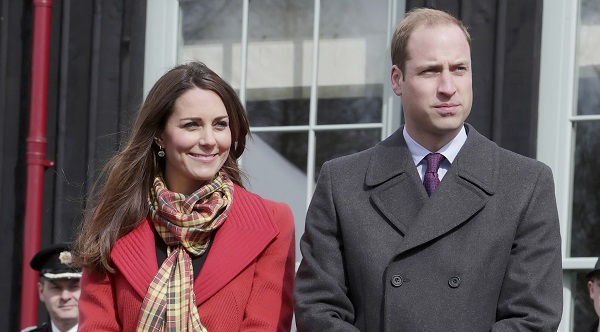 It’s official! The royal baby was born at 4:24 PM BST on July 22, 2013 in London’s St. Mary’s Hospital. The press release from the Palace says, “Her Royal Highness The Duchess of Cambridge was safely delivered of a son at 4.24pm. The baby weighs 8lbs 6oz. The Duke of Cambridge was present for the birth.”

“The Queen, The Duke of Edinburgh, The Prince of Wales, The Duchess of Cornwall, Prince Harry & families have been told and are delighted. Her Royal Highness and her child are both doing well and will remain in hospital overnight.”

The royal baby is the first child for William and Kate and will be the third in line to the British throne after his grandfather Prince Charles and his father, Prince William.

“Both my wife and I are overjoyed at the arrival of my first grandchild. It is an incredibly special moment for William and Catherine, and we are so thrilled for them on the birth of their baby boy,” Prince Charles and wife Camilla said in a statement. “Grandparenthood is a unique moment in anyone’s life, as countless kind people have told me in recent months, so I am enormously proud and happy to be a grandfather for the first time and we are eagerly looking forward to seeing the baby in the near future.”

Prime Minister David Cameron spoke to press gathered outside of 10 Downing Street, saying, “It is wonderful news from St Mary’s, Paddington and I am sure that right across the country, and indeed right across the Commonwealth, people will be celebrating and wishing the royal couple well.”

“It is an important moment in the life of our nation but, I suppose, above all it is a wonderful moment for a warm and loving couple who have got a brand new baby boy. It has been a remarkable few years for our royal family — a royal wedding that captured people’s hearts, that extraordinary and magnificent jubilee and now this royal birth — all from a family that has given this nation so much incredible service. They can know that a proud nation is celebrating with a very proud and happy couple tonight.”

Kate’s pregnancy was announced in December 2012 after she was admitted to the hospital for hyperemesis gravidarum. Since then Kate has been the most watched (and classily dressed) pregnant woman on the planet, handling the media circus and crazy rumors like the pro she is.

Because, oh, were there rumors.

Oh, wait, that one was real.

With the royal baby here, hopefully the public can drop the rumors and move on to more pressing matters — like fervently hoping the royal baby inherits his mother’s perfect head of hair, or anxiously anticipating the first royal baby and Uncle Harry photos.

Congratulations to the happy couple and cheers to the royal baby boy!