Darius Rucker was “absolutely shocked” when he received racist tweets during the weekend. It seems at least one country fan doesn’t want to let this singer into the genre, but others feel quite differently! 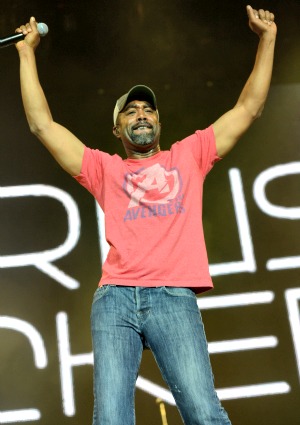 Darius Rucker could barely believe what he was reading when a racist tweet was sent to him Sunday.

After a Twitter user by the name of pqkullman wrote, “@dariusrucker Leave country to the white folk,” the True Believers singer shot back to ask, “WOW. Is this 2013 or 1913”?

He went on to add, “Ill take my grand ole Opry membership and leave your racism. Wow.”

Before signing off from Twitter, Rucker added, “Gotta go to bed this has been hilarious tonight. If any hater thinks I care what u think. I don’t make music for u. So don’t listen.”

During a recent Rolling Stone interview, the racist tweet incident came up, with the 47-year-old explaining, “I was absolutely shocked. Sometimes people will say, ‘You’re not country,’ and I know what that means, because they can’t be talking about the music. But when somebody says to leave country music to the white folks, that is unbelievable to me… But that’s life. That’s something that I’m going to have to deal with the rest of my career, because I’m a black guy in country music and there are people who don’t like that. But it’s not going to make me quit.”

Race doesn’t only come up on Twitter, though. Darius Rucker recalled a real-life incident to the magazine, sharing, “I was in Walmart about three weeks ago, and this older gentleman came up to me and told me how much he loves ‘Wagon Wheel.’ He said, ‘You know what’s funny? That the black guy has the country-est song on country radio!'”

How would you have responded to the racist tweet Darius Rucker received?