Director Bryan Singer tweeted out a photo of actress Jennifer Lawrence in a close-fitting blue body suit for her upcoming role in X-Men: Days of Future Past. She’s looking incredibly fit for her powerful turn in the 2014 action film. 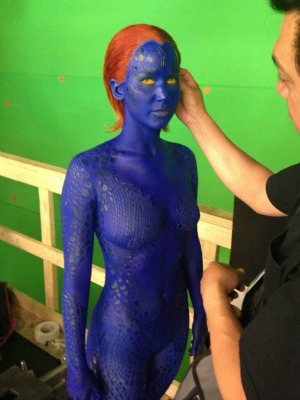 First she’s an Oscar winner, and now she’s getting naked? Yes, that’s actress Jennifer Lawrence all decked out in a blue body suit for the next installment of the X-men franchise.

The photo was tweeted out by director Bryan Singer on Monday and it gives fans a very revealing look at Lawrence’s fit body. She’ll be playing Raven/Mystique in 2014’s X-Men: Days of Future Past.

Many of the cast from the Marvel series will be reprising their roles, including Hugh Jackman as Wolverine, Halle Berry as Ororo Munroe/Storm and Anna Pacquin as Marie/Rogue. Some new faces will also be joining the crew, with fascinating casting to round out the film. Look for Games of Thrones star Peter Dinklage to step in as the main antagonist while Twilight‘s Booboo Stewart will make the young teens swoon with his turn as James Proudstar/Warpath.

According to IMDB, the story line focuses on The X-Men “travel[ing] in time to change a major historical event that could globally impact on man and mutant kind.” Fans are eager to see the return of the Marvel characters since the last installment was seen in theaters in 2011.

Lawrence continues to have one of the most enviable careers in Hollywood. Not only is she an Oscar winner, but she’s balanced her love for indie film with serious roles in franchise films like The X-Men and The Hunger Games.

In addition to The X-Men film, audiences will next see her paired with her Silver Linings Playbook co-star Bradley Cooper in Serena. That film hits the big screen on Sept. 27 while The Hunger Games: Catching Fire will be released on Nov. 22.