The cute little baby from The Hangover franchise is all grown up and we’ve got some fun facts from his mom. 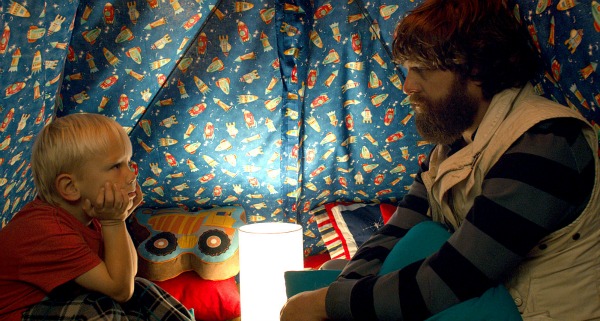 Who can forget that cute little baby Tyler (aka Carlos) who spent most of the original Hangover film strapped to Zach Galifianakis in a baby carrier and wearing sunglasses?

That cute little baby is all grown up — well, at least a little grown up — and he’s starring again in The Hangover Part III. There’s no mistaking it’s the same baby from the original though, and his mom knows why. “The cheeks kinda give it away, right?” his mom, Carrie Holmquist, joked to People magazine.

Zach Galifianakis takes woman he saved to The Hangover 3 >>

People released some fun facts about the littlest member of The Hangover franchise:

He shared his role with girls

In the first film, the role of Tyler/Carlos was primarily played by Grant, with twin sister Avery providing backup along with six other babies — all girls. The twins’ mom remembers the shoot. “We started shooting in Vegas and it was the pool scene, which was fun,” Carrie said. “They had shot for two days prior to us getting there, so there are a couple clips in that movie where it’s not Grant or Avery.” Otherwise, it’s about “60 percent Grant, 40 percent Avery,” their mom revealed.

For the third film, Grant actually won the role despite the initial call for 6-year-old child actors (he was 4-and-a-half when they filmed Part III). They also cast an older understudy in case “he had a meltdown on set,” joked Carrie.

While Cooper and Helms hung out with Grant between takes, it was his scene partner, Zach Galifianakis, who the young actor really formed a bond with. “Zach did an amazing job loosening Grant up,” said his mom. “He’s the type of kid who’s very analytical and intelligent. So he kind of walks into a room and takes it all in first so it was really nice to have those personalities warm up to him.”

That love hasn’t stopped now that the filming is over. “When he sees him in the trailer or in the paper, he’ll go, ‘Oh, there’s Zachy!’ He’s taken to calling him Zachy,” Carrie said. “Grant loves him.”

“We got to do a promotional photo shoot and that was an interesting day as well,” Carrie revealed. “We were just lounging at the studio waiting for Grant’s turn and there’s Bradley on one couch and John Goodman walks by and Ken Jeong and I had a great heart-to-heart. He’s a physician and has twins, too. Just nice, nice people.”

In addition to playing soccer and loving his Legos, Grant “has an infatuation with Yoda,” says Carrie. “He was interested in finding out how he uses his light saber, but what Grant really likes about him is that he’s wise. It really resonates with him that Yoda tries to reason with people first, the idea of using the force and being a great Jedi. I thought that was so cool, for a 4-1/2-year-old to realize that. He’s pretty amazing.”

Did you recognize the cute baby from The Hangover in the picture? What do you think of all the fun facts we revealed about him?