Justin Bieber’s pet monkey, Mally, awaits his fate in Germany. Will the singer’s former pet end up in a zoo?

While Justin Bieber was busy this weekend accepting an award at Sunday night’s Billboard Music Awards amidst boos, and kissing Selena Gomez backstage (to the disgust of Taylor Swift), his former pet was hanging out in Germany awaiting his fate. 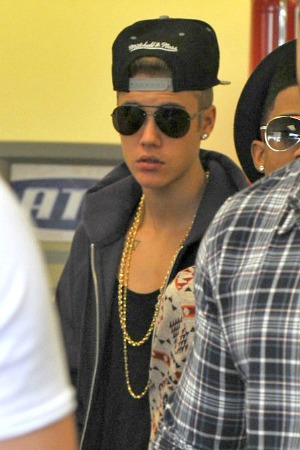 Adam Levine vs. Justin Bieber: Who’ll do the most damage in Vegas?>>

The Capuchin monkey, named Mally, was seized from Bieber after officials discovered the singer attempting to bring the pet into Munich on his private plane without the proper paperwork. The monkey was quickly put in quarantine at an animal shelter and eventually Bieber decided to give the pet up.

Since then, the monkey’s future has been in the hands of the German officials and today is the day that they decide exactly what to do with Mally. One official said that he wasn’t sure where Mally would go, but wouldn’t divulge it even if he did because “Mally needs quiet.” The official did speculate that Mally will likely end up going to a zoo in Germany and that they were trying to find one that had a lot of Capuchin monkeys so that Mally could be integrated into a new family.

As for the animal shelter where Mally has been staying, they plan to send Bieber an invoice once it’s decided where Mally will go. The costs are estimated at around $6,500 and the singer will reportedly have six weeks to pay it. If he doesn’t, things could get ugly for Bieber if he ever visits Germany again. One official told E!Online that if Bieber didn’t pay up, “customs will go out to his plane to get the payment right then.”

Additionally, Bieber may still have to face animal cruelty fines, as well as some of the costs from Mally’s next home. That will be for The Federal Agency for Nature Conversation to decide in the next couple weeks.

Is Mally better off? Do you think Justin Bieber’s pet monkey will be happier in its new home in Germany than traveling with the singer?