January Jones has some choice words for people who are dying to know what famous face might be the father of her son Xander. 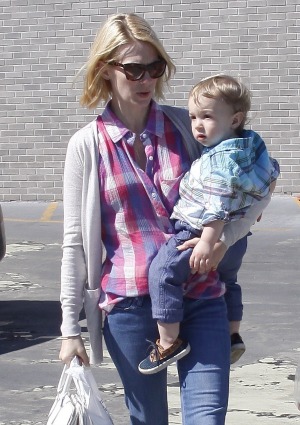 The Mad Men actress says we can call off the Maury Povich paternity police, because the answer is none of our business.

In an often-frosty interview with the New York Times, Jones said the paternity of her 20-month-old son Xander is nobody’s business but his own and we should keep our noses out of it.

“That’s my son’s business,” she told the paper. “It’s not the public’s business.”

“Women should have lots of secrets,” she added. “It’s our right to have secrets. Otherwise, what would we write in our memoirs?”

Turns out Jones got some sage advice from a veteran actor who was a legendary playboy before the tabloids routinely hounded stars for their dirty laundry.

“Jack Nicholson once told me: ‘You should never give your personal life away, otherwise people will pick you apart. They’ll never believe in your character.'”

Jones famously left the father’s name off of the birth certificate when Xander Dane was born in September 2011. At least one of the paternity suspects strongly denied the rumors, with Vaughn’s rep saying, “Legal counsel for Matthew Vaughn strongly denies that his client had an affair with January Jones, or is the father of her expected child.”

So for now, the baby daddy remains a mystery.

Keep up with all your favorite celebrity families — subscribe to the SheKnows Entertainment newsletter! >>