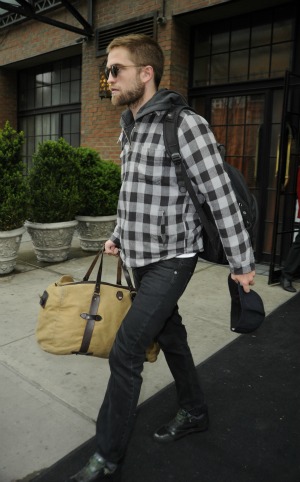 Well, we were kind of hoping it wasn’t true, but after reporting just a few days ago that it looked like Robert Pattinson and Kristen Stewart‘s relationship might be over, it looks like it really is over. Pattinson was seen this weekend packing up and leaving Stewart’s house on Sunday afternoon.

People magazine posted a picture showing Pattinson driving away from Stewart’s Los Feliz home with his belongings piled in the back of a red pickup truck. The actor, sporting a scruffy beard and baseball cap, also took his dog with him, which is as good a sign as any that things are truly over between the couple. When a man takes his dog, you know he means business.

It’s been a rocky road for the couple as they’ve had their fair share of ups and downs over the past year or so. Having reconciled after Stewart had a fling last summer with her Snow White and the Huntsman director Rupert Sanders, they seemed to be on the mend. Just last month, Pattinson gave Stewart a $40k b-day present and some were predicting that the next announcement could involve another bauble, perhaps something to be worn on Stewart’s ring finger.

Robert Pattinson: Liquid diet made me into a whiz kid >>

But alas, it looks like it wasn’t meant to be. Just a few days ago, an unnamed source had claimed that the couple was broken up for good. The details were sketchy, which might have suggested that someone got their facts wrong, but now we’re going to have to believe it.

It’s hard to tell anything from the photos that have been posted over at People and E!Online, but if we had to guess, we’d say that it looks like the move was at least amicable. There were no reports of anyone yelling or Stewart throwing Pattinson’s things out into the yard. We’re happy that they’re keeping things peaceful and if they have to end it; at least they’re going out with some dignity.

Do you think that Pattinson moving his things out means that it’s truly over for the couple? Is there a chance for reconciliation?