One of the creators of The Daily Show is facing a harsh backlash after making an insensitive joke about the Oklahoma tornado on Twitter.

Turnabout is not always 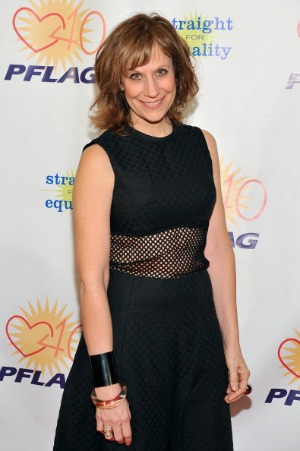 fair play, as one Hollywood player is finding out. Daily Show co-creator Lizz Winstead thought she was turning extremist conservative commentary on its head with a single tweet about the Oklahoma tornado yesterday, but instead the writer has found herself mired in controversy.

“This tornado is in Oklahoma, so clearly it has been ordered to only target conservatives,” wrote comedian Winstead. “How long has Obama known about this tornado?”

The tweet was meant as a send-up of the current political battle between President Obama and conservatives in Congress over the IRS allegedly targeting certain political groups for auditing. However, pretty much no one saw it that way.

User @swashamokc added, “As an Oklahoman, I don’t think this was something that would result in my continuing to follow you.”

Winstead was at first unrepentant, firing back, “If its not OK to YOU for me to combine news stories to point out hypocrisy AND Im not making fun of victims u shld Unfollow.”

But as the criticism rolled in and the tornado’s death toll continued to climb, the comedian saw the error of her ways.

“Made a political joke, Twas before devastation revealed. In hindsight, had I understood, I would have refrained. Beyond sorry. ?#LetMeHaveIt?,” she later tweeted.

“Im recommending Make a donation now. Text REDCROSS to 90999. If any Oklahomans have a charity that they love, hit me up I’ll tweet it out,” she added.

At least one frenemy came to the writer’s aid. Conservative pundit Glenn Beck tweeted his support of Winstead, writing, “Leave lizz winstead alone. Clearly bad joke. How many of us has made a joke we wished we could take back?She has to feel awful.#castfirststone.”