Deep down, Zach Galifianakis is just someone who wants to help others. When he found out a friend was in trouble a couple of years ago, he helped her out. And Monday she got all dressed up and accompanied the actor to the premiere of The Hangover Part III. 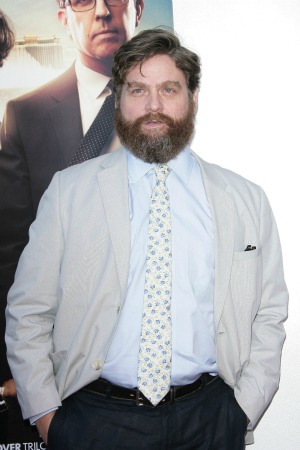 With Zach Galifianakis’ demeanor and humor, it’s hard to forget sometimes he is a real genuine person under the comedy. But the actor is actually a dedicated humanitarian, and he showed it off Monday night in Los Angeles.

The Hangover Part III trailer: Back in Vegas… with giraffes? >>

“All the fans were taking photos and I waved at them, I said, ‘They don’t know who I am!'” Haist told the Daily News.

But before any rumors are started, it’s important to know that Haist is 87 years old. She is a former homeless woman that met Galifianakis almost 20 years ago.

Zach Galifianakis likes the job, could do without the fame >>

“Galifianakis met Haist at the Fox Laundry when he was just starting out in Hollywood back in 1994,” Locker said. “He befriended Haist at his local laundromat where she volunteered, surviving on the tips patrons gave her.”

Two years ago, Galifianakis heard Haist had become homeless, so he found her and now pays for a one-bedroom apartment for her.

“He also recruited his friend, actress Renee Zellweger, to the cause, and Zellweger outfitted the woman’s apartment with furniture and makes sure Haist’s fridge is always stocked with food,” Locker explained.

Galifianakis has also been taking Haist to his events since that day, including the three premieres.

“I dress up nice and a friend helps me with my makeup. It’s fun, not something I’ve ever dreamed I’d experience,” she told the Daily News. “The limo takes me home afterwards.”

The Monday premiere of The Hangover 3 came just hours after the devastating tornado in the Oklahoma City area. Galifianakis told USA Today it really puts what they are doing in perspective.

“You just have them in your thoughts,” he said. “Just like with any disasters, you feel silly doing a red carpet thing.”