New York Gov. Cuomo warns Khloe Kardashian that if she doesn’t take her top off she’ll be in deep trouble, but is the politician going too far? 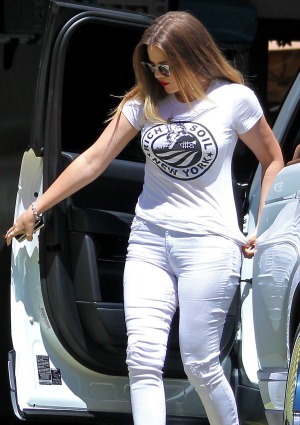 Another Kardashian controversy is rearing its ugly head today as Khloe is being accused of copyright infringement.

The trouble started when Khloe was spotted stepping out in a curve-hugging tight white T-shirt from her and her husband Lamar Odom’s Rich Soil clothing line sporting a logo nearly identical to that of the New York State Department of Agriculture.

When New York Gov. Andrew Cuomo spotted the shirt, he fired off a cease and desist letter to warn Khloe that unless the item was yanked from the Rich Soil website, they’d be on the hook for some crazy cash.

The letter also demanded an accounting of how much money Rich Soil has already made off the form-fitting design, which retailed for $35.

“The State of New York has invested substantial time, effort and resources creating the respect and goodwill associated with the trademark,” Susan Rosenthal, a lawyer for the Department of Agriculture, said in a letter sent to Rich Soil on Friday.

Keep up with the Kardashians — subscribe to the SheKnows Entertainment newsletter! >>

By the next day, the shirt had been removed from the site.

For legal reasons, Gov. Cuomo refused to gloat over the victory. “I wish I could [comment] in some ways,” Cuomo said at an unrelated news conference, “because it would at least be a little more interesting than what I normally do.”

Khloe’s T-shirt trouble comes in the wake of a charity scandal that saw her and Lamar accused of funneling cash from their cancer foundation away from its intended target.