Looking for Me is an introspective novel about a woman who tries to forget her past by losing herself in her work of restoring furniture.

When Beth Hoffman burst onto the Southern fiction scene with her debut novel Saving CeeCee Honeycutt, readers everywhere were charmed by her memorable characters. Set in the 1950s, the story follows 12-year-old CeeCee, whose mentally ill mother dies suddenly. CeeCee believes she’s all alone, until her Aunt Tootie arrives in style to take CeeCee back to Savannah, Georgia. It’s a sugar-sweet novel that’s full of hope, promise, and the utter charm of young CeeCee.

With her eagerly anticipated second novel Looking for Me, Hoffman delves into some of the darker places in life, while still retaining that Southern charm her readers have come to know and love. 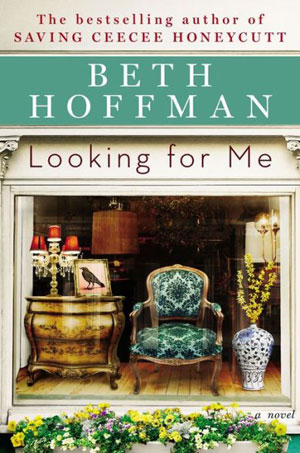 About Looking for Me

Teddi Overman never fit in when she was a child in her small town. Her brother found solace in the wilderness, taking in and caring for animals, but Teddi never was able to find her place. That is, until she began restoring old furniture as a hobby and discovered her passion for finding old things and making them new again.

A chance encounter led Teddi to where she is now, far away from the home where she left so much behind working at a furniture shop in Charleston, South Carolina.

Teddi’s mother is all the family she has left after her brother disappeared into the wilderness one day long ago. Though her head tells her that he’s dead, her heart says that he’s making a life with the animals he had so much compassion for. Teddi has never let go of that hope, though, so when she receives a sign that he might still be alive, she begins to search for him, wanting to be reunited with the brother she so loves.

But as Teddi delves deeper and deeper into the past, she begins to lose her grip on the present. She starts falling behind at work as she is consumed by her search for her brother. Teddi must determine what is important to her in the here and now, and decide when it’s time to simply let go of the past and accept things for what they are. Hoffman’s second novel is sure to delight her legions of fans and those new to her work.