You probably know Zach Galifianakis as the hilarious scene-stealer from The Hangover movies but, before he was part of the wolf pack, Zach was cracking people up with his off-kilter stand-up. Here are a few of our fave jokes from the hairy little fella. 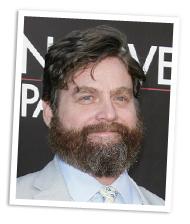 You probably know Zach Galifianakis as the hilarious scene-stealer from The Hangover movies but, before he was part of the wolf pack, Zach was cracking people up with his off-kilter stand-up. Here are a few of our fave jokes from the hairy little fella.

I want to do another reality show based on ‘The Mole,’ but it’s really about STDs — sexually transmitted diseases — and it’s called, ‘God, I Hope That’s a Mole.’

You know it’s time to do the laundry when you dry off with a sneaker.

The only good time to say I have diarrhea is during a game of Scrabble,
because it’s worth a sh*tload of points.

Did you ever wake up with an erection… and find yourself in a massage chair at Brookstone? And you yell to the sales clerk, ‘I’ll take it!’

I wanna open up a maternity shop and call it ‘We’re F***ed.’

My headshot is a scratch and sniff — it smells like failure and onions.

Growing up, my dad was like, ‘Zach, you have a great last name: Galifianakis, Galifianakis. Begins with a “gal,” ends with a “kiss.”’ I’m like, ‘That’s great, Dad. Can we get it changed to ‘Galifiana-f***’ please?’

I once walked in on my grandparents making love… and that’s why I don’t eat raisins.

I have to stop crying when I watch ‘The View.’ It’s not because
of the topics at hand, I just feel sorry for that couch.

I call my balls the Bush twins.

It’s really hard for me to perform tonight, and I’ll tell you why — four years ago to this very date, I decided to take my own life. And I said, ‘Zach, do it in front of your co-workers and your manager at work. End the misery.’ I don’t know how many of you have tried to jump off a Pizza Hut, but you really just get a sprained ankle out of the deal. And then you have to go back inside and serve Crazy Bread.

This year my New Year’s resolution was to stop saying ‘Seacrest, out!’ after I ejaculate.

Watch some of the best of Zach’s stand-up!