He is, after all, the guy who said former President George W. Bush doesn’t care about black people. So is anyone surprised Kanye has found another pressing issue to expose? That would be a no. 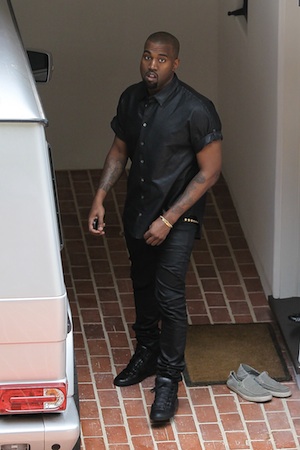 I mean, did you know what to expect when you heard that the latest single from Kanye West is called “New Slaves”?

All I knew was that the song would be controversial. And boy, is it.

Kanye targets the Corrections Corporation of America and its widespread 60 prison ownership dominance over the nation.

The Huffington Post also mentions that the CCA is the “largest private prison company” that generates several billions of dollars each year. OK, so what? Did I mention Salon reported that industries like retail and call centers are vastly dependent on prison labor? Yeah.

Kanye is not a fan of the media right now >>

You see, that’s Kanye’s connection: He’s exposing the direct link to our overflowing prisons to a booming prison business and the companies that rely on the labor of those who are incarcerated. It sounds sketchy to him, and listeners may share the sentiment.

I mean, on average, how many of us think about people in prisons unless we have someone we love in there? The incarcerated are out of sight and subsequently out of mind. Kanye exposes this wound and airs out his dismay over how this breeds a new generation of slaves. He wants people to wake up, and this track does just that.

Kanye may be hurting for other reasons >>

I must say this man is a creative genius. How? He caused quite the marketing mayhem when he tweeted out that the track would be premiered across 66 locations globally (via a projector!). Talk about a memorable music premiere. He also performed the song on Saturday Night Live, holding the audience captive with his dark passion for its message.

The lyrics are not for our young listeners, but they are powerful enough for people to pay attention to. He not only mentions the prison issue, but also the presence of racism that still manages to exist today. Powerful, powerful messages. Whether you agree or not, it’s a must-listen to understand his perspective.

Want more music with meaning? Why not stay updated on the latest music news and releases by signing up for our newsletter? >>

Is he creative? Absolutely. Is he innovative? Most certainly. Is he right? That’s up to you to determine. Whether you like him or not, he may be onto something. The song is a fiery summoning of active listeners to come forth to see the hustle going on in this shunned portion of our society. Check it out below and drop us a line to tell us what you think!

Want more music? Check out these other music reviews: