The future of SNL is uncertain as the show undergoes a shocking mass departure of favorite and familiar cast members — including the series’ head writer. 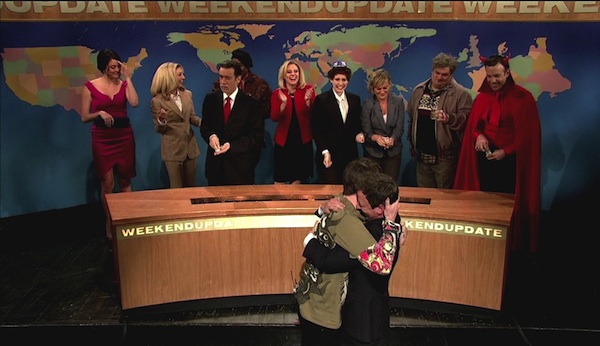 NBC is likely panicked with the recent exodus of both hilarious and familiar cast members. While the show does a fairly good job with talent recruitment, it’s obvious the cast is hit or miss with viewers. The awkward and abrupt departure of Abby Elliott, Kristen Wiig and Andy Samberg at the end of the 2011-12 season left viewers hesitant about the future of the historic show.

Now as the 2012-13 season comes to a close, fans just lost Hader and must prepare for the upcoming departures of Sudeikis, Armisen, and of course, Meyers. Notably, Meyers currently serves as SNL‘s head writer — a position he has excelled at since 2005 and managed solo from 2008 to 2012.

SNL veteran Andy Samberg moves on to the BBC >>

Loyal SNL viewers often notice that the comedic performances of the majority of the remaining cast members are inconsistent, with exceptions for Taran Killam and Bobby Moynihan. This leaves SNL in an uphill battle to not only maintain current expectations but to exceed the baseline in order to keep the show relevant.

Variety calls the SNL cast crisis a “talent drain” that SNL co-creator and executive producer Lorne Michaels must plug quickly — likely through financial means — before SNL is forced to rely primarily on new and developing talent. Variety points out that new isn’t necessarily bad. Quite the opposite: new talent brings a “restorative effect” to SNL and “clears the way for growth.”

But SNL is a struggling show. Its ratings are average at best and skit quality can range from Emmy-award winning “D*** in a Box” moments to clumsy performances akin to amateur improv. With such a wide spectrum, SNL is held together with its band of veteran cast members whose familiar characters and infectious chemistry keep viewers connected to each weekly show.

How SNL addresses its cast crisis for next year is tricky — no doubt the future of SNL rests in the precious few months before September 2013.