We’re chatting with Anne Heche about her new series on NBC, Save Me. In our interview, the actress shares her own experiences with God, struggles and second chances.

Related story EXCLUSIVE: Kelly Rowland Talks Zoom Birthing & Whether Beyoncé or Michelle Would Be a Better Babysitter
“I’m very fortunate to be here” 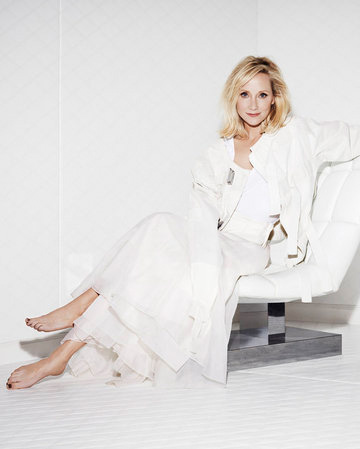 In NBC’s new comedy Save Me, Anne Heche plays a 40-year-old Ohio housewife with a direct lifeline to God.

While her friends and family think she’s gone nuts, Heche’s character Beth is truly blessed and taking advantage of a second chance at life.

In her own life, Heche has gone through many difficult times and through it all, came out on top. See what the actress has to tell us about her new show and her own experiences with God and second chances.

SheKnows: So what’s Save Me all about?

Anne Heche: Save Me is about an Ohio housewife who is not really having a great time in her life. She just found out her husband is having an affair. She’s not a great mom. She hasn’t been a great wife, and we come into the show at that moment. She’s drunk, falling down the steps, goes into the refrigerator, and chokes to death on a hoagie sandwich that she was shoving shamelessly into her mouth. Just when you think she is absolutely dead, she is saved by God. Now she has a direct communication with God Almighty. He is giving her a second chance, hoping that she understands that there is life and hope and love for her, and also giving her the physical understanding about every single person out there.

SK: So she’s a sort of prophet? Helping others?

AH: Well, it’s a comedy. So sometimes she takes a certain interpretation of what God is saying and it’s not always necessarily true!

SK: What do her family and friends think of all this?

AH: They absolutely do not believe her! There’s present Beth, and there’s “Bad Beth” Bad Beth is everything that happened before God, and you know she was a wreck and she made a fool of herself and her friends and embarrassed everybody, including her child. So this seems to them, not only like she’s crazy, but also like, ‘Who can reinvent themselves this quickly?’ Is it a scam? Does anybody believe her and can she believe herself?

SK: Can you relate to the things your character is going through?

AH: Really this show is about a 40-year-old woman having a second chance at life. I’ve gone through some rough patches in my life and wanted to reach out and have been very blessed by friends and family and the business giving me a second chance. I really like having the opportunity to make fun of that journey and also have people understand that there’s always a second chance for us. We can always come into this world and find a new reason to live.

SK: Do you believe in God?

AH: I think we all have our own relationship with God. Mine has gone though many different incarnations, from the time I was born into a very religious community. And there have been times when I thought God was very near, and times when I thought God was very far. This show offers the suggestion that God is whatever we need God to be for us. I’ve had that relationship with God, and I’m very, very fortunate to be here.

SK: Well, we’re very excited to see the show! What else do you have coming up this summer?

AH: I’m getting ready to take a trip to Germany to bring them the sunblock that I came out with for kids, Tickle Time. It’s thrilling, and my kids are going. They are, of course, the face of Tickle Time. We haven’t even been out for a year, so it’s very, very exciting. I’m also producing a show for Kate Walsh called Bad Judge, so it’s a very exciting summer.

Be sure to catch Anne Heche on Save Me, premiering tonight at 8/7 c on NBC.