Blue Ivy Carter won’t be getting a little brother or sister any time soon, says Jay-Z. 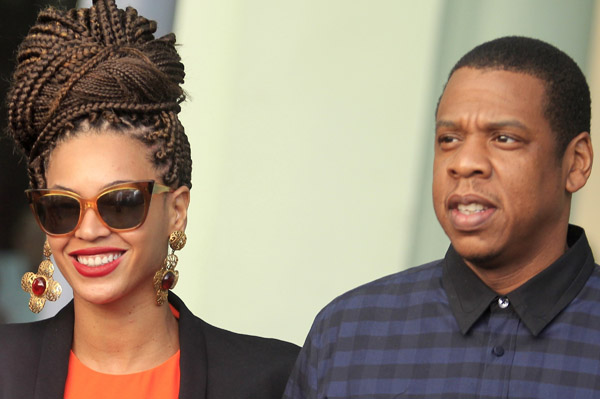 Trying to decide what to get Jay-Z and Beyoncé to celebrate the upcoming birth of their second child? Well, put away your credit cards: The 31-year-old singer isn’t pregnant, according to Jay-Z.

Well, the words didn’t exactly come out of his mouth, but a DJ at NYC’s Hot 97 said the “Empire State of Mind” rapper emailed him to stop the rumor mill.

“I hit him to say congratulations, send my love to the fam,” program director Ebro Darden said Monday, referring to an email he sent Blue Ivy’s dad.

Beyoncé is having a little more fun with the rumors, though. The singer walked on stage during her Saturday performance in Zurich, Switzerland, with a pair of strollers.

However, she later posted a defiant note to her Instagram account early Monday that seemed to call out, well, basically everyone for caring about the state of her uterus.

“I can’t stop the rumors from starting, and I can’t really change peoples minds who believe them, all I can do is sit back and laugh at these low life people who have nothing better to do than talk about me,” read the note, according to the U.K. Daily Mail.

She later took it down.

It seems a little harsh, but Bey might just be trying to protect her family’s privacy — especially little Blue Ivy’s.

“And I am very protective,” she told Good Morning America recently. “I just want to make sure that she can have a healthy, safe, normal life… in the back of my mind, she’s my priority. And life is completely different now. So I’m — I feel really, really just lucky that I can still do what I love, and now have a way bigger meaning. And that’s to be her mother.”

Read on for more Jay-Z and Beyoncé

How much money do Beyoncé and Jay-Z really have?
Why is Jay-Z and Beyoncé’s trip to Cuba controversial?
Beyoncé and Oprah talk pregnancy, weight gain and Jay-Z