Nashville star Hayden Panettiere clears up the confusion about her rumored engagement to boyfriend Wladimir Klitschko. She says there is “no ring.” 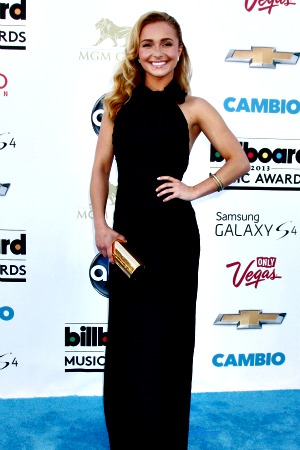 Don’t start looking for that online wedding registry just yet! Hayden Panettiere has confirmed that she is not engaged to her boyfriend, Ukrainian boxer Wladimir Klitschko. The Nashville actress walked the blue carpet at the Billboard Music Awards on Sunday where she cleared up the erroneous rumors.

She held up her hand to show a ringless finger to E! News and said, “No ring,” when they asked about a possible wedding. This ends the speculation that the tiny actress and the tall athlete were planning to get hitched sometime soon.

However, she never said she wasn’t engaged. Panettiere only admitted to not having a ring on that evening. Could she be holding back and keeping her engagement under wraps? We will have to wait to find out.

The couple has had an on-again, off-again relationship since 2009. They split in 2011 only to reignite the romance in January.

Even if the rumors are false, the duo did enjoy a night out together in Vegas. While Klitschko didn’t walk the carpet with Panettiere, he was definitely in attendance.

The 23-year-old explained to the entertainment channel, “He’s wandering. He’s taking my friends out back.”

The six craziest moments at the 2013 Billboard Music Awards >>

The couple continued the fun after the show and hit the official after-party at the Marquee Nightclub. So, it was all play and no Vegas drive-thru wedding for the two this weekend.

Panettiere also revealed some disappointing news for fans expecting a Nashville tour with some of the artists and actors from the freshman show. It is not happening this summer.

The former Heroes star shared, “I’m kind of confused as to when they think that’s going to happen. We shoot from the end of July to the end of April.”

Nashville will be back in the fall for its second season on ABC.