Raunchy comedy king Seth MacFarlane confirms he will not return to host the 2014 Oscars, and taps an unlikely successor. 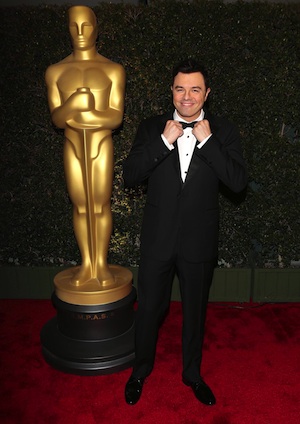 Seth MacFarlane to host the 2014 Oscars? Nope. Not a chance. And that’s not just the prayer of the numerous critics and viewers who are still irritated with MacFarlane’s crude and often sexist comedic approach to the 2013 Academy Awards.

Actresses upset over “We Saw Your Boobs” … or were they? >>

Seth MacFarlane is the 39-year-old creator and star of FOX’s raunchy cartoon Family Guy. The show often plays into gender and racial stereotypes with political and cultural jabs thrown in for good measure.

While Family Guy and MacFarlane’s blockbuster film Ted are extremely successful, Seth had great difficulty adapting his comedy toward the broader audience of the 2013 Oscars.

MacFarlane took to his Twitter account to let over 4 million of his fans know he would not return as the host of the 2014 Academy Awards.

Just a few hours ago, Seth explained he simply could not commit to the project.

“Traumatized critics exhale: I’m unable to do the Oscars again. Tried to make it work schedule-wise, but I need sleep. However, I highly recommend the job, as Zadan and Meron are two of the most talented producers in the business. My suggestion for the host is Joaquin Phoenix.”

Seth MacFarlane’s wish to see Phoenix host the pinnacle of Hollywood’s awards season is unlikely to come true as the Los Angeles Times reports Joaquin Phoenix is completely turned off by celebrity red carpets. He spoke to the paper in 2012 and was direct with his distaste.

“I don’t believe in [awards shows]. It’s a carrot, but it’s the worst-tasting carrot I’ve ever tasted in my whole life. I don’t want this carrot.” Just for emphasis, Phoenix went on to describe Hollywood’s award season as “stupid” and “uncomfortable.”

While Seth MacFarlane claims he’s unable to host the 2014 Academy Awards due to scheduling conflicts, he quickly quieted hosting rumors in the days that followed the 2013 Oscars. “No way. Lotta fun to have done it though” said Seth via his Twitter account when asked by a fan if he would want to host the show again.

Despite the critics and backlash, the 2013 Academy Awards pulled in their highest ratings in three years with over 40 million viewers with Seth MacFarlane as the host.