Courtney Love is back and heading out on a mini solo tour on the East Coast. 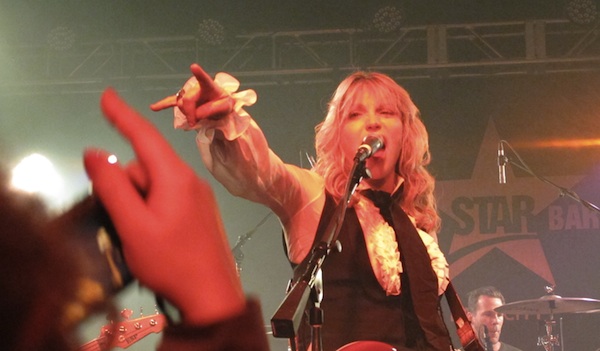 Last month, Courtney Love was out to save rock and roll by appearing on Fall Out Boy‘s new album. Now, it looks like Courtney wants to continue rocking and rolling.

Miss World has just announced that she’s embarking on a mini solo tour this summer.

At the end of last year, referring to her band, Courtney tweeted, “Hole is dead.” So it’s all solo from here on out for Miss Love.

However, this tour — which consists of only seven shows — is a far cry from the “about 70 shows” she told Wonderland Magazine she’d be playing in June and July.

In the same interview, Love also claimed that she had new music for the world to hear with two “excellent” singles that she was going to release in mid-April.

How not to be a mom like Courtney Love >>

While we’re still waiting for new music from Courtney, there’s a good chance that fans will be hear some of these rumored new songs if they catch her live.

The bad news? Well, you can only catch her tour — or concert series, as the case may be — if you live on the East Coast.

But all of this activity makes us wonder: is a Courtney Love comeback on the horizon?

Courtney and Francis Bean— her daughter with Nirvana front man Kurt Cobain — have seemingly made up and she’s been reviving her image by becoming one of the faces of fashion house Saint Laurent Paris and the spokesperson for NJoy electronic cigarettes.

Plus, Courtney also hinted in her interview that she was being looked at to be a judge of an undisclosed televised talent competition. She didn’t say which one, but gave us this hint: “I don’t wanna say the name of it. If Ellen DeGeneres can be a judge, I mean, hello?”

Courtney Love as an American Idol judge? Well, let’s put it this way, at least the show wouldn’t be boring.

Is the world ready for a Courtney Love comeback? Let us know what you think in the comments below.