This winter, spend your holidays with Will Ferrell. The actor returns to the big screen in Anchorman: The Legend Continues. The latest trailer teases more liquor, venom and unnecessary awkwardness. 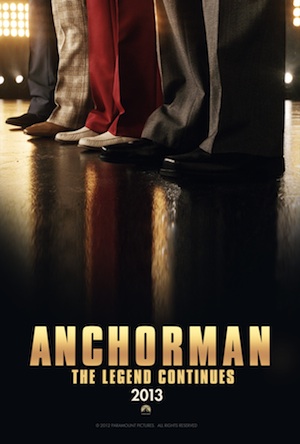 It’s time to break out the suede and polyester. After nine long years, Ron Burgundy is back! This December, Paramount will release Anchorman 2: The Legend Continues. It’s the follow-up to 2004’s Anchorman: The Legend of Ron Burgundy.

Since the first film’s release, most of its stars have gone on to bigger and better things, so it’s great to see them back on their old stomping ground. In this new teaser trailer, Burgundy and company remind you of their dated awesomeness.

Champ says, “I’ve got liquor breath and I want to be your friend,” while Brian reveals, “I got a new cologne — it’s called Venom. It’s pretty much 100 percent snake venom.” We’re interested to see if the scent can top its predecessor, Sex Panther. Remember, they did studies and 60 percent of the time, it worked every time.

As usual, Brick has to step in and make everything weird. Instead of saying a cool catchphrase, he deadpans, “Happy Easter. Always make sure the parents are around if you hug a child.” Classic Brick. One day he’ll get it right. One day.