While Christine White may not be a household name, an episode of The Twilight Zone she starred in in 1963 will forever be remembered. 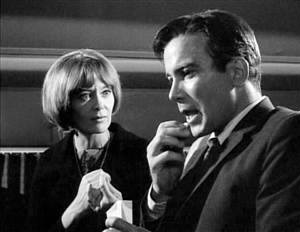 With Star Trek being released over the weekend, it’s easy to forget William Shatner ever did anything besides play Captain Kirk on the legendary show. But in 1963, he appeared in an episode of The Twilight Zone. The woman who played his wife in that episode passed away on April 14 at the age of 86.

Christine White acted in Hollywood for 25 years, but the episode of The Twilight Zone will be remembered forever.

“Julia Wilson wore pearls and a face of reassurance as she and her husband, Robert, took their seats on an airplane operated by Gold Star Airways half a century ago,” said William Yardley with the New York Times. “Robert Wilson had just been released from a sanitarium. Six months earlier he had suffered a mental breakdown — on an airplane.”

PHOTOS: Celebs get the Vulcan makeover >>

The couple thought they were headed home, but they were really headed to The Twilight Zone.

“The episode, ‘Nightmare at 20,000 Feet,’ based on a short story by Richard Matheson, portrays a man’s descent from anxiety into startling but possibly lifesaving violence as he takes action to stop a ‘gremlin’ that he — and only he — can see on the plane’s left wing tampering with an engine in the middle of a stormy flight,” Yardley explains.

The episode has been redone by numerous other TV shows, such as Saturday Night Live, 3rd Rock from the Sun and The Simpsons, and has become a classic in American culture.

According to the New York Times, Christine White was born May 4, 1926, in Washington. She graduated from the University of North Carolina in 1947, and moved to New York to be an actress after graduation. In the early 1950s, she moved to Hollywood and appeared in numerous movies and TV shows, including Bonanza, The Untouchables, and Father Knows Best.

“In ‘Nightmare at 20,000 Feet,’ viewers look to Julia Wilson to know what to make of her husband,” Yardley says. “While he worries, she dozes on sleeping pills. When he continues to see the gremlin out the window to his left, he turns to his wife, calm and determined to be supportive, to his right. At one point he begs her to tell the flight crew what he is seeing even though, when she looks out, or others do, the gremlin is nowhere in sight.”

White played her last part in 1976, but her life will forever be remembered because of perhaps one of the most famous episodes of The Twilight Zone.