Gleason dies, Sally is robbed, half the office is high and there’s absolutely no Joan. 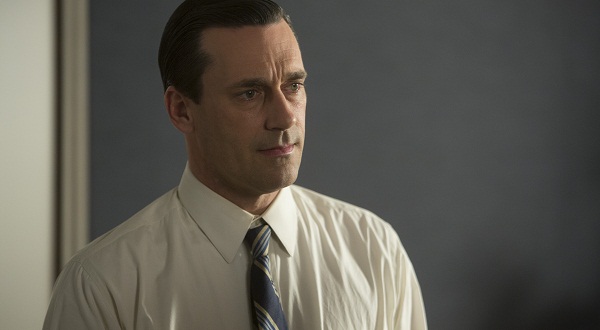 Spoiler alert: Do not read this if you haven’t watched Mad Men‘s latest episode, “The Crash.”

“The Crash” opens with exactly that: a crash. Ken (Aaron Staton) is back in Detroit for another unsuccessful meeting with the boys from Chevy. Except their meetings always turn into adventures. This one involves Ken behind the wheel of an Impala with hands over his eyes as he tries to drive. He returns to the Time Life Building needing the assistance of a cane. By the end of the episode, though, he’s tap dancing. Literally.

Who would have ever thought an episode of Mad Men could be any more trippy than the time Roger did LSD? I certainly didn’t, but apparently I should have known better. After Gleason’s death, the office is in a slump and Cutler calls in a doctor to administer a shot-cocktail of “vitamins” and other stimulants. We immediately know this will result in hilarity when, upon Don (Jon Hamm) coming out of the office after his injection, Stan and another nameless copywriter are racing across the office.

What follows is, as Ted calls it, gibberish

Ginsberg and Peggy (who didn’t take part in the drug-doing) spend most of their weekend in the office at the table writing down anything that comes from Stan Rizzo’s mouth. It’s not the usual slow pace of the creative team. It’s quick-fire and none of it is all that good. (Later, Rizzo shows up ecstatic over his new list, containing 666 ideas. Meanwhile, Don is stuck on tracking down a pitch from a long time ago that was done for a can of soup (or, as it turns out, oatmeal). His hunt is sparked by a coughing fit which sent him into a flashback of the time one of the prostitutes nursed him through a chest cold and then became his, *ahem*, first.

Post-funeral, Peggy (Elisabeth Moss) comes back to work and appears to be drunk. Or at least not in her right mind. She’s so out of it, she allows the team to play a game where they throw X-Acto knives at a picture of an apple taped up above Rizzo’s head. Ginsberg is the only entirely sober person in the place and he volunteers to go first.

When his knife lands in Rizzo’s arm, it’s Peggy to the rescue. What follows is the best moment all season: Stan and Peggy finally kiss. All those great phone conversations and initial head-butting finally pay off. She immediately blows off his attempts and he soon lets it go, instead telling her of his cousin who died in Vietnam. If her shunning of his attention disturbed him, it’s hard to tell. By the end of the episode, Rizzo’s in his office having sex with the random hippie girl who turns out to be Gleason’s daughter. Gross. Cutler watching through the crack in the door and trying to pull Peggy into the spying, though, is pretty humorous. 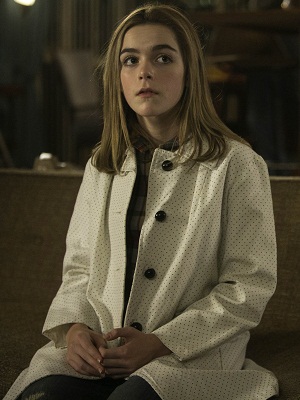 Peggy is left at the apartment and in charge of Gene and Bobby while Don works and Megan goes to see a play. Late in the evening, she stumbles out of her room at the sounds of cluttering keys and happens upon an African-American woman. The lady claims to be Sally’s long lost grandmother and soon convinces Sally to let her make her food. It’s not until she starts asking about Don’s watches and complaining that the TV is too secured in the wall that Sally realizes that they’re probably being robbed. She calls the police, which is smart, but her plan is thwarted. She should have called the neighbors and asked them to come up.

In Don’s altered state, he goes on a chase for that elusive ad. Although he did find it, it turns out the ad wasn’t helpful for Chevy at all. Somehow, in his mind, it’s going to help him win back Sylvia. He spends his entire drugged up haze trying to figure out how to get her back. When he’s finally alone with her in the elevator (the night after he finds out his children, left alone at home, were robbed), Don says nothing. It’s no longer worth it.

What do you think made him hold back from accosting her with his speech?