Spoiler alert: This is a recap of Game of Thrones‘ Season 3 episode called “Second Sons.” If you’ve not yet seen the episode and don’t want anything ruined, do not read. 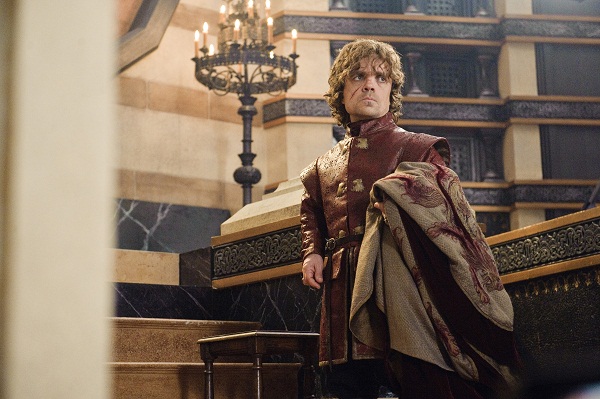 Quite a few things happened this week on Game of Thrones. Nothing topped the first of the new Lannister marriages, though.

Tyrion and Sansa getting married

I’m not sure who to feel worse for this week. On the one hand, poor Sansa Stark has been paired off with someone she doesn’t want. At 14 years old, no matter how exposed she might be to the game at this point, it’s still awfully unfair. On the other, Tyrion (Peter Dinklage) is stuck marrying someone who is clearly disgusted by him. He tries to explain and be kind. He’s always been incredibly courteous to her during her entire stay. Now that they find themselves forced together for eternity, she can’t even force an understanding smile.

As if their strange relationship doesn’t get their marriage off to a rocky start, the wedding was downright awful. When Sansa showed up for the ceremony, she was expecting to walk down the aisle alone. The cruel King Joffrey showed up at her side, though. Since her father couldn’t make it, he thought he (the father of the country) should give her away instead. Things got worse when Joffrey carried away the step stool left at the altar for Tyrion. When Westeros tradition dictated that he cloak his new wife to show he’ll watch over her, he had to ask Sansa to stoop. Giggles erupted from the crowd.

Joffrey hasn’t really planned on giving her away, though. That became obvious during the reception. He found time to corner his former-fiancée, current sister-in-law, and reminded her that if he wanted her, he’d still have her. He even threatened to come have his way with her once the very drunken Tyrion passed out. He then tried to further her misery by inciting a frenzy about upholding the Westeros tradition of carrying the new bride and groom to their bed and helping them prepare for each other.

Game of Thrones renewed for Season 4 >>

Tyrion was outraged and quickly put Joffrey in his place. Of course, the King wasn’t at all pleased with that. When he began to throw a temper tantrum, though, Tyrion played up his drunkenness. 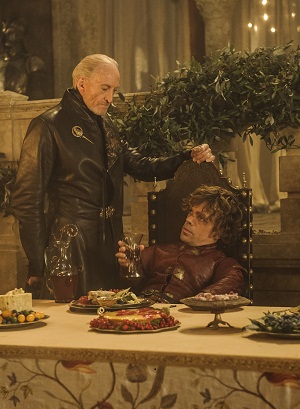 In their chamber, I expected that Tyrion would turn out to be completely sober. As if the whole thing were an act to avoid sleeping with Sansa. He really was completely smashed, though. When he told Sansa that Tywin was insistent that they consummate their marriage, Sansa gave in. She swigged some wine (no matter how much he doesn’t want to be with Sansa, either, that still seemed cruel) and began to strip. At the last minute, he stopped her, though. Proof Tyrion really is a good guy.

By the blood of the bastard

In case you missed the signs since Season 1 and the official discovery last week, Arya’s friend Gendry is the bastard son of the late King Robert. Somehow, he ended up in the hands of the Red Witch, and this week she used him to her advantage. I think she wanted to kill him, but Stanis talked her out of it. Instead, she seduced the young blacksmith and then used leeches to take the blood she wanted. Afterwards, she and Stanis threw the leeches into the fire, asking for God to seek their revenge on a few of their least favorite people. Let’s see who dies first.

Most viewers have probably had a pretty rough time with The Hound. In Sansa’s eyes, he is (to a certain extent) a savior. Yes, he told Cersei when Sansa “became a woman.” However, he’s also saved her from multiple rapists. And, he’s been a calming spirit in stressful situations. On the other, Arya sees him as a murderer and there’s nothing but contention between them. Arya will always be my favorite of the Stark sisters. And yet, I’ve had a hard time accepting her hatred for The Hound.

Last week, he kidnapped her in the woods and I was immediately worried for her. It seems that may have been unnecessary, though. While he has yet to follow through on his promise, he did tell Arya he wasn’t taking her back to King’s Landing. Instead, he was returning her to her mother. That’s rather kind (though, it seems mostly done in rebellion against the Lannisters).

Play the Game of Drink >>

That’s it for this time, but don’t forget: More weddings are to come. We still have Joffrey and Margaery, Cersei (Lena Headey) and Loras and the wedding at River Run. What do you think the chances are that at least one of these weddings turns out worse than Sansa and Tyrion’s ceremony?