It’s official: CeeLo Green and Christina Aguilera are coming back to The Voice next season. Don’t worry, Team Usher and Team Shakira fans: They’re coming back, too! 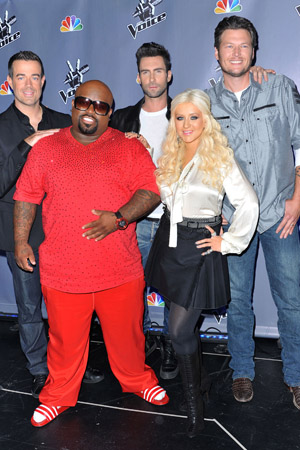 It’ll be a big game of musical judges’ chairs on the next two seasons of The Voice.

NBC confirmed Friday that Christina Aguilera and CeeLo Green will re-team with Adam Levine and Blake Shelton for Season 5 of the hit reality competition in the fall, while Shakira and Usher will come back to their thrones for Season 6 next year.

Shakira is totally stressed over losing the baby weight >>

“We locked in a plan several months ago to have the outstanding Christina Aguilera and CeeLo Green rejoin Blake and Adam for cycle 5, and we’re pleased to announce that the original four coaches are going to be back together in the fall,” said Paul Telegdy, president of Alternative and Late Night Programming, NBC Entertainment, in a statement.

“They’re the reason this show was launched so strong for the first three cycles and we owe them a debt of gratitude. And after careful consideration of everyone’s schedules for next spring, we are excited to be returning the current cycle of judges — Shakira and Usher along with Blake and Adam — for cycle 6, which will premiere after the Winter Olympics.”

CeeLo Green: The Voice without me is a “totally different show” >>

Why are they doing this? Simple: Ratings! According to NBC, the current season of The Voice is averaging about 14.5 million views on Monday nights and 13.4 million on Tuesday nights. Every telecast this season — including the recap episodes — has won its time slot in the coveted 18-49 demographic.

“I am so thrilled that our Voice family has grown from four coaches to six,” executive producer Mark Burnett said Friday. “This show thrives on the ability of our coaches to continue to balance their enormous music careers with working on The Voice to coach some of the best undiscovered talent in America. The coaching panel of Christina, CeeLo, Adam and Blake was at the heart of this show in its first three seasons and we are so lucky to have found equal success with Shakira and Usher in season four. Our best seasons are ahead of us.”

Tell us: Is it a good idea to keep all the judges, or should they ditch two permanently?

Read on for more television news