Farrah Abraham is determined to stay relevant. After selling her sex tape, she’s now working on her own reality show and leaving Teen Mom behind. 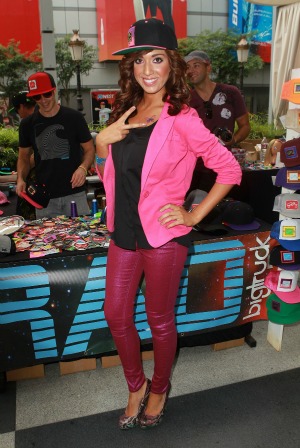 Farrah Abraham sure knows how to keep her name in the news. In 2013 alone, she has received a DUI, waxed her daughter’s unibrow, and filmed a sex tape. If you were hoping this was the last we’d see of her, think again.

In an interview with HollywoodLife.com, the former Teen Mom star revealed that she’s moving to L.A. to kick-start her career.

She shared with the entertainment website, “I think for sure moving to Los Angeles is in the cards right now, because I’ve been here every week. It’s better that Sophia and I are together more instead of separate because [the distance] is getting to be a lot.”

The two will be hitting the West Coast because she wants her own reality show and she wants to include her 4-year-old daughter Sophia in her on-camera shenanigans.

Abraham said, “There are a lot of meetings for a spin-off show with me right now, so I just need to see what I like. I have had other leads in the past when I got out of my contract with MTV, but I haven’t found anything I agree with yet but when the time is right I’ll be OK with that.”

She continued, “Sophia will of course be in it. My daughter is part of my life; she is going to be involved.”

The former MTV star is ready to leave Teen Mom behind and pave her own path in Hollywood. However, has she given any thought to the fact that a sex tape might hurt her chances?

In a recent Keek video, the 21-year-old defended her choices.

She vented, “You have been a single mother for four years, off and on, dating loser-a** boys who always try and sell information, lie to you, manipulate you. You have just realized you are an awesome person and you deserve someone. Now that you’re 21, you’ve pretty much been crying every night because you are single and you’re alone. So, you make your own video, celebrate your awesome body [and] get your own sexy shots.”

Abraham didn’t reveal what network is interested in producing her reality show. However, you can bet with a move to L.A., this girl is going to be a paparazzi favorite.