Scott Foley (Scandal) stars in FOX’s new comedy The Goodwin Games. Check out a sneak peek video and meet the rest of the cast. 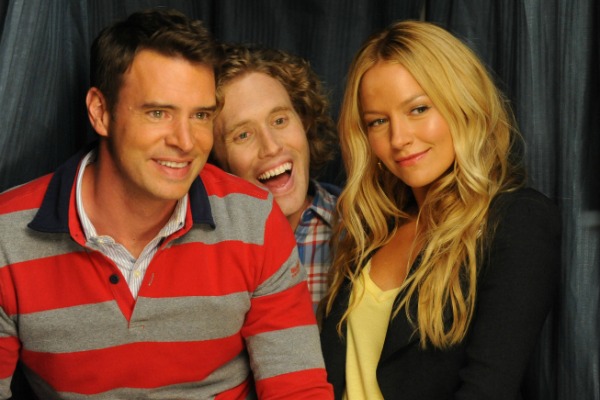 When he’s doing a guest spot on shows like Grey’s Anatomy and this season of Scandal (did you catch what happened to his character in the finale? Wow!), Scott Foley can be one very serious guy. Well, get ready to see the lighter side of the actor as he stars in FOX’s new comedy about three siblings battling over an inheritance from their beloved father. The Goodwin Games premieres Monday, May 20, at 8:30/7:30c on FOX.

Foley plays Dr. Henry Goodwin, the “goody two-shoes” of the three who is a well-respected surgeon with not just one, but two degrees from Harvard. Henry knows he’s good at everything he does and he’s not afraid to say it. With a penchant for snazzy sweater vests, Henry thinks he’s got what it takes to win the ultimate game of sibling rivalry.

Henry’s brother Jimmy is played by T.J. Miller. Also known as the up-to-no-good Goodwin, Jimmy is an ex-con with a heart of gold. He’s doing his best to be a good guy now that he’s out of the slammer, but thanks to a bad guy named Frankie, Jimmy is having trouble keeping his nose clean.

American Idol: Is Nicki Minaj out too? >>

Becki Newton plays Chloe Goodwin, who was once a good little girl who bonded with her father over math equations. After discovering that being a mathematician wasn’t exactly going to make her one of the cool kids in school, Chloe dropped her math-y tendencies. She’s still desperately trying to hide the nerd in her, but doesn’t always succeed.

Check out the sneak peek video from The Goodwin Games below:

What do you think now that you’ve seen a sneak peek of The Goodwin Games? Are you excited to see the new series from FOX?

Want to get updates about The Goodwin Games sent to your email inbox? Sign up for our SheKnows newsletters! >>