All the competition wasn’t between the contestants at last night’s American Idol season-wrapper, that’s for sure. 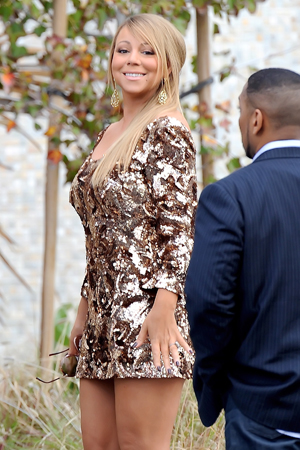 Mariah Carey and Jennifer Lopez are rumored to be rivals — and if that’s true, Carey added a lot more fuel to the fire by refusing to give Lopez a standing ovation during the season finale of American Idol.

Both of the divas performed on last night’s show. Carey, clad in a white red carpet-worthy gown and what looked to be approximately one million gazillion dollars in diamonds, chose to do a (clearly pre-recorded) medley of her past hits.

Lopez, for her part, wore a pair of the shortest shorts known to mankind under a skimpy white dress and performed her current single, “Live It Up” with Pitbull.

From Carey’s reaction, it didn’t look like she was enjoying the crowd’s cheers as Lopez performed.

Then at the end of the song, judges Nicki Minaj, Keith Urban and Randy Jackson all enthusiastically leapt to their feet to applaud Lopez after her turn. Carey stubbornly stayed in her seat.

Carey and Lopez do have a bit of a history together. As Hollywood Life reports, ex-husband Tommy Mottola gave Jennifer Lopez some material Carey wanted for the soundtrack to Glitter when Mottola was CEO of Sony Music. “In a way, Jennifer was picked by Tommy to be the next Mariah after their divorce,” writes Hollywood Life.