It’s been a roller-coaster of an awards show year for Taylor Swift. The girl used to be a shoo-in for any nominations she got, but lately she hasn’t been able to trump other contenders. Will the Billboard Music Awards put her back on top? 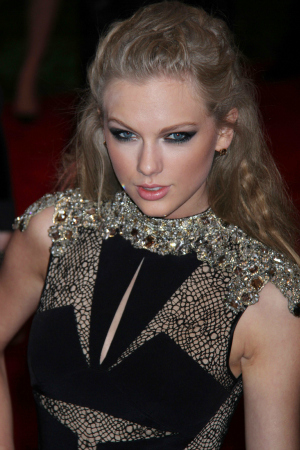 How much have people noticed Taylor’s lack of acceptance speeches? Well, panning to her seat every time someone else wins an award she’s up for has become a standard at award shows as of late. It’s as though the world is waiting with bated breath for her to pull a page from Faith Hill’s or, better yet, Kanye West’s playbook.

Taylor’s losing streak started back in November of last year at the Country Music Association Awards. In a preview of an emerging country award pattern, Blake Shelton beat Taylor out for Entertainer of the Year, while his wife, Miranda Lambert, beat Taylor out for Female Vocalist of the Year. She even lost out on Musical Event of the Year for her Hunger Games soundtrack single “Safe & Sound,” featuring The Civil Wars. That nod went to Kenny Chesney and Tim McGraw for “Feel Like a Rock Star.”

And, most recently, the month of April served up another round of defeat in the form of the Academy of Country Music Awards. Taylor lost, once again, to Luke Bryan for Entertainer of the Year and to Miranda Lambert for Female Vocalist of the Year. Throwing in some new blood, though, she also lost to Little Big Town for Video of the Year and to Eric Church for Album of the Year.

So, what’s the deal? According to Billboard, “Red” makes Taylor the only woman to have had two albums sell at least 1 million copies in a week (the other was 2010’s “Speak Now”). The album has received rave reviews from critics and fans alike, not to mention celebrity supporters — in an award acceptance speech, Miranda Lambert specifically pointed out how much she adored “Red” and was shocked to beat out Taylor.

But, hey, the Billboard Music Awards could very well be Taylor’s night. She’s up for 11 awards, including Top Artist, Top Female Artist, Top Billboard 200 Album and Top 100 Artist. The good news? Country competition Blake Shelton, Luke Bryan and Miranda Lambert aren’t even on the ballots… so there’s that. With those guys out of the way, she just needs to trump pop superpowers such as the Biebs, Rihanna, Adele, Adam Levine-fronted Maroon 5 and — awk-ward! — her ex Harry Styles’ band, One Direction. It’s a tough talent pool, but the country princess is long overdue for a big win. You can do it, Taylor!

Watch Taylor’s “I Knew You Were Trouble” video!