Putting on weight while in rehab is common, and rail-thin Lindsay Lohan finds she’s not immune. 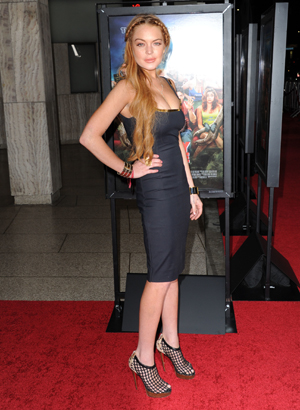 A rehabbing Lindsay Lohan is having trouble zipping up her pants and she’s blaming it on Adderall — or rather, the lack of it.

Lohan has felt “extremely emotional this past week and is finding comfort in food,” a source told the RadarOnline. “Lindsay can’t stop eating, and has gained five pounds because she has such poor eating habits.”

To make things harder for the star, she’s not allowed to take Adderall at the Betty Ford Center. Adderall is a drug used to treat ADHD, which Lohan has been diagnosed with. She says the Adderall, a stimulant that contains amphetamine, helps her focus.

Without it, the star apparently doesn’t have as much energy. “She’s been exercising, but she just doesn’t have a lot of energy,” the source told RadarOnline. “She’s been talking to a nutritionist at Betty Ford about eating healthier.”

Lohan has been taking Adderall for years for her reported ADHD.

But in 2010, after a stint at UCLA’s Neuropsychiatric Hospital, the doctors there said that Lohan doesn’t have ADHD at all, and in fact, much of her erratic behavior is similar to that of people who take Adderall but don’t have the disorder.

Addiction specialist Dr. Joe Haraszti told TMZ that Adderall does help ADHD sufferers focus, but acts like methamphetamine or cocaine when taken by someone who doesn’t have ADHD.

Symptoms of Adderall abuse can include “driving around until all hours of the morning… smoking heavily… tweeting and texting all night long.”

It can also cause sleep problems, leading Adderall users to start taking other drugs, such as Trazodone and Ambien, to fall asleep. TMZ reported in 2010 that Lohan had a prescription for Ambien.