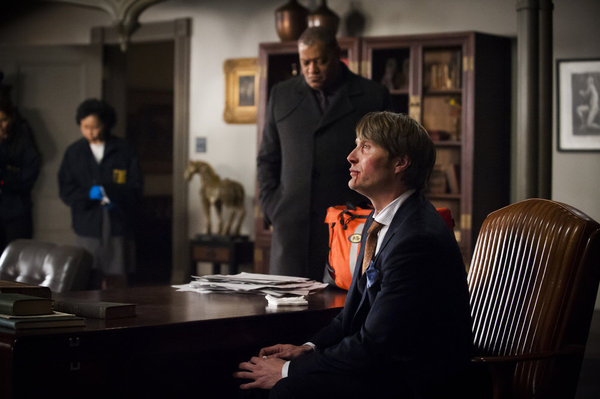 I’m sure everyone remembers that touching moment from last week when Dr. Lecter (Mads Mikkelsen) told his therapist, “I can make friends,” in a rather pitiful voice. Unfortunately, the friendless doctor does not understand that murdering people isn’t the best way to make friends. Especially if they want to be your friend so badly that they’re murdering people just to get your attention. That sounds like a kindred spirit. Don’t kill that guy.

Franklin (Dr. Lecter’s patient who is also overly eager to be friends) has introduced him to an instrument maker named Tobias. Tobias is a serial killer whose gruesome attacks rival Dr. Lecter’s. He likes to rip apart his victims and use their organs as strings for instruments and, you guessed it, play them like one too.

Tobias wants to be close to Dr. Lecter and even revealed that he watched him kill the medical examiner last week. This doesn’t bring Hannibal’s guard down — instead he lures Tobias in for a fancy dinner where he plans to kill him. But, Will Graham (Hugh Dancy) shows up first, scaring the killer/future victim into hiding.

Will is very distraught and has come to Dr. Lecter for help, even though it seems he still doesn’t trust the guy. Will is still hearing things, seeing the random animal visions and is getting pretty spooked by his crazy ability to “become” a serial killer and read them so well. To top it all off, he finally shared a kiss with his longtime crush Dr. Alana Bloom, only to have her hurry off in an attempt to “follow her own advice” and not get involved.

In the end, Tobias and Franklin wind up in Dr. Lecter’s office and two of the three people do not get out alive. Lecter loses his patience and breaks Franklin’s neck. Then, Tobias enters the ring and the two serial killers face off and battle like men, not like the weird, blood obsessed, SAW-rivaling cannibal organ thieves they are. Lecter’s victory is vicious. He breaks Tobias’s arm, destroys his windpipe and crushes his skull with an elk sculpture (what is with the elk motif on this show? Is Will hallucinating elk because he saw the sculpture in Lecter’s office?).

Stay up to date on all things Hannibal! Subscribe to the SheKnows newsletter! >>

Dr. Lecter then goes running to his dear therapist, Dr. du Maurier (Gillian Anderson) and uses this brutal attack as a way of deepening the intimacy between them. What does he want from her? He doesn’t seem to want to sleep with her or kill her… yet.