Last night’s Arrow was a real tearjerker. It was filled with dramatic moments, including an unexpected death. Producer Marc Guggenheim explains why a certain character had to go. 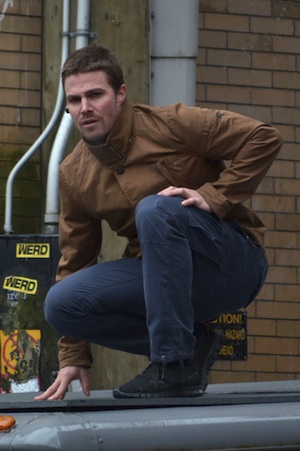 Wednesday night, The CW wrapped the very successful first season of Arrow. It started with a bang and ended with a death. Viewers were left in shock.

We knew with a title like “Sacrifice,” death would rear its ugly head. The trick was figuring out who would meet their maker. At various points in the episode it seemed as if Felicity, Diggle, Laurel or even Thea could go. But thankfully, they all survived. Too bad we can’t say the same for Tommy (Colin Donnell).

After The Glades were leveled by Malcolm’s Undertaking device, Tommy rushed to save Laurel. She was trapped under a beam when he came to her rescue. He rushed her to safety but stayed inside when the building collapsed.

Oliver ran in just in time to hear Tommy’s last words. It was a heart-wrenching scene played perfectly by Stephen Amell and Donnell. So why Tommy? Out of all the characters, why’d he have to go? Executive producer Marc Guggenheim tells TV Guide the method behind the madness.

“When we thought about the characters that he could lose who would have the biggest impact not just on Oliver, but on the show, Tommy was the name that rose to the top very quickly. Tommy’s death impacts pretty much every member of our cast,” he explains.

“Obviously his death impacts Oliver and Laurel (Katie Cassidy), but there’s a closeness between Thea (Willa Holland) and Tommy that we’ve established on the show, Lance, obviously because of the connection that Laurel has with Tommy and Moira (Susanna Thompson) because of her responsibility with Tommy. He’s the one character whose death would have the biggest impact.”

Tommy’s absence will be felt by all the characters, especially Laurel and Oliver. After Laurel and Tommy broke up, she quickly jumped into Oliver’s arms. Guggenheim says, “She feels an enormous amount of guilt over, ‘Did I pick the wrong guy?'”

We’ll find out how deep this goes when Arrow returns this fall on The CW.