As you may already know, we’re pretty wrapped up in the new show Da Vinci’s Demons on Starz. Check out this exclusive clip! 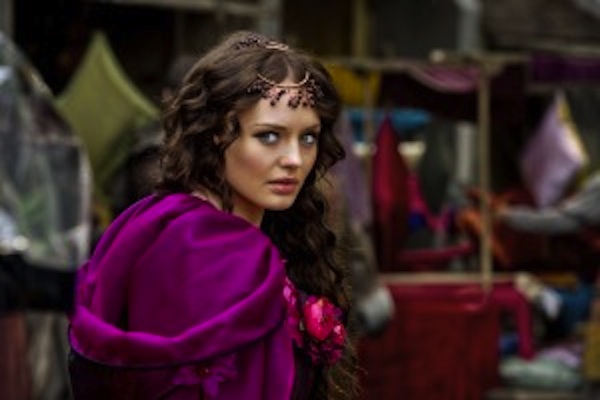 On the upcoming episode of Da Vinci’s Demons, the spy may finally be revealed as Lucrezia (Laura Haddock). SheKnows has an exclusive first look at the new episode, which shows Giuliano (Tom Bateman) focusing his efforts on ferreting out the spy. Too bad he’s looking in the wrong places.

In the clip, Giuliano is going through the book Becchi gave him before he was killed. Giuliano still mourns his death. Watch…

Clarice (Lara Pulver) finds him and asks him to escort her to an upcoming pageant while Lorenzo is off on diplomatic forays. She tries to charm him by saying she’s grateful Lorenzo has a brother who knows his way around the dance floor. Though Clarice attempts to seduce Giuliano by placing her hands first on his thigh and then on his shoulder, Giuliano refuses her.

He tells her instead that Becchi charged him with discovering the spy despite the mountain of evidence that was piled against Becchi. Plus, after the kiss he shared with Vanessa last week, we doubt his thoughts are on Clarice.

Clarice says Giuliano’s intent to do the right thing is his most attractive quality. She backs off a bit on her seduction attempts, but we doubt she’s given up for good.

Giuliano doesn’t have any breakthroughs about the spy’s identity in the clip, though. In fact, he thinks the spy must be male.

Also in the episode, Da Vinci (Tom Riley) will come face to face with Dracula after a clue from the Turk leads Da Vinci to Wallachia. Dracula has the creepy pale look with a web of scars from a lightning bolt that hit him as a child, but will he also crave blood?

The next episode of Da Vinci’s Demons airs this Friday, May 17, on Starz.